What is ladder logic 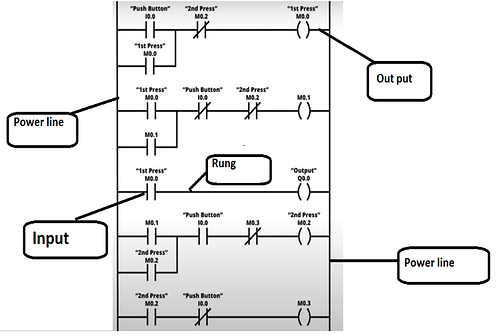 In the above diagram, we can see a ladder diagram. The left and right lines are power lines, rung is the horizontal lines in which the components are placed. In a ladder diagram, the input instructions must be entered at the left side and the output instructions on the right. The lines which are in horizontal are the rungs and each rung represents the operation in the control process. More than one input can be used per rung in PLC. The PLC programming is done by using many logical functions, in a PLC program, the input and rungs could be true or false. The ladder logic programming is based on certain logical functions such as AND, OR, and exclusive OR. Mostly in a ladder diagram, the rung would contain one or more input and an output, the input is a control action and the output is for the device which is connected to the PLC output. The control instructions are operated by rung logic and with this, it can control the operation of the device that is connected to the PLC output. So if there is any logical continuity then the control out will be energized by the PLC. If not then the instruction will be off.

The PLC will process the code from left to right and top to bottom. Ladder logic is the most widely used program for PLC where sequential control of a process or manufacturing operation is needed. Ladder logic is used for simple and complicated control systems. So now PLCs are used for many complex automation systems.

The above image shows the logical AND & logical OR functions and its ladder diagram as the image shows in order to execute an output in AND function all the input must be true while in case of OR function the output will execute if any of the instruction is true.

There are many logic symbols that are used in ladder logic, such as timers, counters, math, and data moves. So because of this we can use any logical function, or control function in the ladder logic. The control decisions are made by logic gates. Then CPU’s are used to do all these functions

How electrical ladder is different from PLC ladder

What is a rung on a ladder logic diagram

The rung is the horizontal lines in a ladder diagram, in the above image we can see the input and out-put instructions in the rung. The output instruction will check the rung and only after that it will execute the function. The rungs can be seen in series between the parallel lines. Each rung in the ladder diagram is an operation in the control process.

What is ladder logic diagram in PLC