What are the Five PLC programming languages?

The most popular Programming Languages of PLCs are:

Ladder Diagram is a graphical programming language that you use to develop software for programmable logic controllers (PLCs). Ladder Diagram uses internal logic to replace everything except the physical devices that require an electrical signal to be activated. 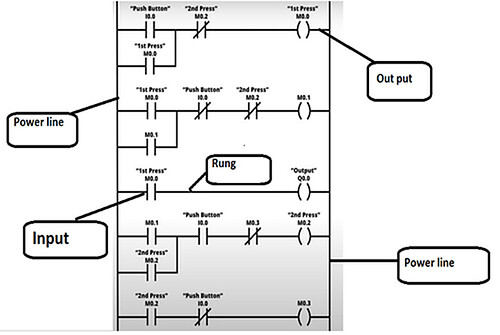 On relay-logic schematics, a ladder diagram is made up of horizontal rungs with two vertical rails that represent the electrical connection.

All of the necessary input conditions, whether logical or physical, can be programmed to affect the output conditions.

All About Ladder Logic We Need To Know

The main disadvantage is that some instructions are not available, which may make programming more complicated, such as motion or batching.

If you’ve worked with flowcharts before, you’ll recognise this PLC Programming language. In Sequential Function Charts, you employ stages and transitions to get to your desired outcome.

Steps play an important role in your programme. These phases contain the actions that take place when you programme them to. This decision can be based on timing, a specific stage of the process, or the physical condition of the equipment.

Transitions are the instructions that you employ to transition from one stage to another by setting true or false conditions.

The Function Block Diagram is a graphical language. Function Blocks were created to offer a framework in which you could set up numerous common, recurring operations, such as counters, timers, PID Loops, and so on.

The blocks are programmed onto sheets, and the PLC constantly scans the sheets in numerical order or is decided by links programmed between the blocks.

Structured Text is a PLC programming language similar to C or assembly. The user enters lines of code that are executed sequentially, evaluates specified functions, performs boolean tests, and activates suitable PLC outputs. For people with an experience in a traditional programming language such as C, C++, Java, or Python, Structured Text enables an easy entry into PLCs. Furthermore, it is easily manipulated in text processors, making it simple to implement without the use of hardware.

This programming language is made up of numerous lines of code, each containing a single instruction. Instruction List is read from top to bottom and from left to right. Because each line is executed consecutively, the Instruction List is very easy to read. Once you’ve mastered the mnemonic codes (Load = LD, Start = ST, and so on), Instruction List is a great language to have in your arsenal since it allows you to write concisely and top time-critical code as needed by your application.

Instruction List, on the other hand, can be more difficult to debug and resolve issues in than some of the other languages. It’s also quite constrained in terms of code structure because “GOTO” is about all you can do to exit the list and run other commands.

The Instruction List language is useful for applications that require compact and time-critical programming.