Actually, only three satellites are required to locate a location on the earth’s surface, with the fourth satellite serving to verify the data from the other three. The fourth satellite guides us in three dimensions and allows us to calculate the height of the device (altitude). 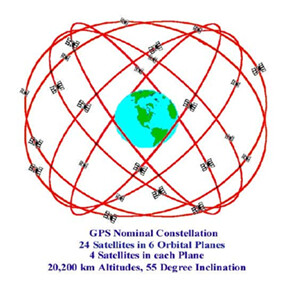 Various countries have their own navigation system like US’s GPS.

How does GPS work?

GPS works using a technique called trilateration. The trilateration technique is used to find the position, altitude, velocity, and it also collects signals from various satellites to find information of the position and display it. It is often mistaken for triangulation, which is used to measure angles rather than distances. Satellites orbiting the Earth send signals to be read and interpreted by GPS devices located on or near the Earth’s surface. A GPS device must be able to read signals from at least four satellites in order to calculate its position. Each satellite in the system revolves around the earth two times a day and each satellite transmits its own signals, orbital, and time parameters. A GPS device can read signals from 6 or more satellites at any time.

A satellite transmits the data in a microwave signal and the GPS device captures these signals and used them to find the distance between the GPS device and the satellite. Since GPS devices only provide distance information from satellites, a single satellite cannot provide much location information. Since satellites do not provide angular information, the location of a GPS device can be anywhere on the surface of a sphere. While a satellite sends a signal, it creates a circle with the radius of the distance between the GPS device and the satellites. Adding a second satellite creates a second circle and narrows its position to one of the two points where the circle intersects. A third satellite can be used to determine the final position of the device because it is at the intersection of all three circles. We are living in a three-dimensional world. In other words, each satellite creates a sphere, not a circle. The intersection of three spheres gives two intersections, so the point closest to the Earth is chosen.

GPS works using a technique called trilateration. The trilateration technique is used to find the position, altitude, velocity, and it also collects signals from various satellites to find information of the position and display it. It is often mistaken for triangulation, which is used to measure angles rather than distances. Satellites orbiting the Earth send signals to be read and interpreted by GPS devices located on or near the Earth’s surface. A GPS device must be able to read signals from at least four satellites in order to calculate its position. Each satellite in the system revolves around the earth two times a day and each satellite transmits its own signals, orbital, and time parameters. A GPS device can read signals from 6 or more satellites at any time.

The radius (distance to the satellite) changes with the movement of the device. Changing the radius will create a new sphere to get a new position. You can use this data in conjunction with satellite time to determine your speed, distance to your destination, and the estimated time of arrival.

DGPS is a GPS enhancement that improves location accuracy.

The GPS receiver, also known as the base station, must be installed in a precisely well location.

Based on satellite signals, the base station receiver calculates its position and compares it to a known location.

The difference between the two locations is applied to the GPS receiver data.

Position accuracy is provided in the sub-meter to centimeter range.

What are the three elements of GPS?

GPS is made up of three different components. They are

Space (Satellites):- The satellites are revolving around the earth and transmit the signal (information) about geographical information and time to the user.

Ground control:- Ground control is a set of computers, antennas, and master control stations. Control activities are tracking and operating satellites and monitoring the data. Monitoring stations are available in almost every continent including North and South America, Africa, Europe, Asia, and Australia

User equipment:- Nowadays GPS is available in gadgets such as watches, smartphones, etc.

The main uses of GPS:

GPS antennas are internal, passive, or active. GPS only be effective when they get satellite signals. However, we need some kind of antenna to transmit data. Portable navigation devices such as phones, watches have inbuilt antennas in the system and some devices have an option to add external antennas for better coverage.

What is the difference between Passive and Active GPS Antennas?

There are two types of antennas that can be installed on your device. These are active and passive antennas.

Active antennas have powerful amplifiers that allow capturing satellite signals from long distances. In fact, the signal received by these amplifying antennas is much stronger than that of the GPS device.

What is a time server?

A time server is a computer server that is designed to read the reference clock’s time and send this information to the client through the computer network. Time server either be internet time server or local network timer. It is done via NTP (Network Time Protocol).

How are time server and GPS antenna connected?

The Network Time Protocol (NTP) is one of the most useful and dependable protocols to connect time servers. It keeps in sync with UTC (Coordinated Universal Time) using GPS. Then it sends the synchronized time to the networked computer or another clock system.

The effectiveness of a network time server may be affected by the strength of the GPS signal reception. GPS signals are very sensitive, so you have to make sure that the installation of the antenna and other devices are properly done.

Purpose of GPS based Time Server in control system

Global Positioning Systems are also used to deploy Exact time, time interval, and frequency. The carrier signal comes from the onboard atomic clock. It is controlled by ground control. GPS satellites transmit time signals from each data subframe is modulated with a carrier wave. While navigation and survey receivers use GPS time location, time and the frequency receiver use GPS satellite transmission. Controls timing signals and generators.

Time and time intervals are distinct concepts. The marking of an event in relation to a reference origin is known as time. A time interval is a difference between two points of time. The time interval is represented by days, hours, minutes, seconds.

Frequency is defined as the number of events that happened in a given time interval as a number of oscillations of the voltage waveform per second.

The Coordinated Universal Time (UTC) system was adopted by many countries in 1972. UTC is developed based on a weighted combination of atomic clocks from around the world and it is coordinated by the International Bureau of Weights and Measures (BIPM) in France. Every now and then, leap seconds are added to UTC.

There are also other time systems that can be compared to UTC. Navigators, for example, use the UTI system, which is based on the angular rotation rate of the earth.

What is GPS Time Synchronization?

Electronic clocks play a vital role in many applications and clocks are actually designed for rate cutting rather than keeping the accurate time.

Even highly accurate clock functions may be interfered with due to various reasons like temperature, humidity, magnetic and electric interference, etc.

Assume two clocks are synchronized at a time and over a time one clock shows an error of 0.04 milliseconds and after a year the difference between the two clocks is around 20 minutes.

Clocks that are calibrated to atomic standards are far more reliable timekeepers. Rubidium, cesium, and hydrogen maser watches are extremely accurate. Out of these, rubidium clocks are mostly used in control systems due to their cost, size, accuracy, etc. However, atomic clocks won’t synchronize with the other clocks. There is GPS that comes in.

GPS/GNSS satellites consist of three or four atomic clocks that are tracked and controlled to be highly synchronized and tracked according to national and international standards (known as Universal Time or UTC). To synchronize the local clock with UTC, GNSS signals are received, processed by the local master clock, time server, or primary reference, and sent to downstream devices like local servers, controllers, etc. Usually, the precision range varies from 1 microsecond to a couple of milliseconds based on the timing protocol.

In any case, GNSS clock synchronization ensures compliance with national and international standards by eliminating the need for error-prone manual clock adjustments.

This time synchronization enables the correlation of multiple events occurring across a process plant, even if they are time-stamped by different clocks. There are numerous advantages, including:

How do you synchronize time?

There are several ways to keep servers, security systems, recording devices, and other devices in sync. Luckily, you don’t have to rely on manually setting the clock or building your own sync tools and shell scripts.

With a popular protocol in place, you can be confident that you will deploy a compatible system and track time as expected.

Now we are going to discuss two most popular timing systems:

Why time synchronization is needed in the control system?

In the event of a plant trip or failure various events occur across the process plant in a very short time period, time synchronization is really important in these scenarios for a process engineer to trace the root cause of trip or failure. With proper timestamps, engineers will be able to track the sequence of events and diagnose the cause of the trip or failure.

What is the protocol used for time synchronization?

The NTP is used in servers that give various information to the clients like computers in the network, with current Coordinated Universal Time, or UTC, information in response to individual requests. The different servers in the network could ask the present time, some devices provide more accurate data than others due to factors like system lag and latency.

In this network, the time-keeping servers are installed in distinct strata called layers. In Stratum 0, usually, installed the most accurate device in the network such as atomic, radio, and other high-precision clocks GPS satellites. Stratum 1 server is referred to as the primary time server and it is connected to Stratum 0 directly.

This is commonly called PTP. It is based on IEEE 1588. This protocol is used where NTP lacks accuracy. PTP provides very high accurate synchronization than NTP due to the use of hardware-based timestamping

Master clocks make a contact with the server by sending them data that they can use to stay in synchronization instead of clients requesting information about the time. The information passing from one machine to the other gains a timestamp at each stop as a PTP grandmaster communicates with the clocks it’s synchronizing.

Why is timestamping important?

These sequential records serve as a reference for determining the amount of network delay between the master clock and the slave clock.IEEE 1588-compliant devices can use such features to: