In an electrical system if any fault occurs in the system then that part must be isolated from the remaining part of the system which is healthy and this can be done by the help of circuit breakers, and it is also helpful to protect our equipment it will control the sudden rise of current or voltage

A circuit breaker will break the circuit either manually or automatically under the conditions like no-load, full-load or short circuit and thus it is very helpful for switching and protection of various parts of the power system.

BASIC ACTION OF A CIRCUIT BREAKER 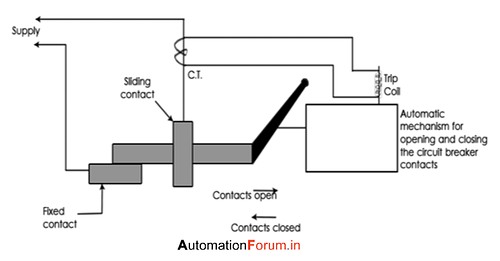 In electrical circuits, there are many chances where the wire would heat up and it may cause fire and by using a circuit breaker we could prevent this

This circuit breaker employs high air pressure as arc quenching medium and the air blast cools the arc and it will sweep away the products of arcing to the atmosphere and by this the dielectric strength increase of the medium between contacts and it would prevent the arc to reestablish. Thus the current flow is interrupted 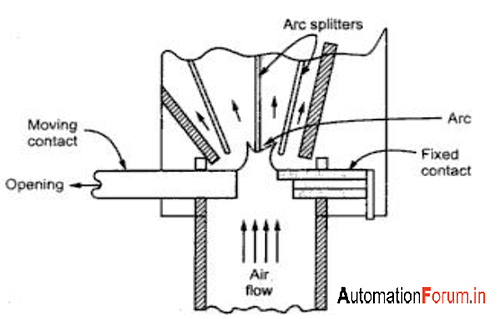 In this, the moving contact is situated near the arc splitter. This splitter will lengthen the arc by the help of the air blast. Fixed contact is mounted between two insulating blocks. This type of breakers are used in indoor circuit breaker of medium-high voltage

Sulfur hexafluoride gas has high dielectric strength and good arc extinguishing properties it is an electronegative gas so it has the ability to absorb the free electrons and its density is five times that of the air and free heat conversion is 1.6 times than that of the air, it is non-poisonous and non-inflammable. It could have been the most perfect gas medium for the circuit breakers but it is not, because it is one of the gases which creates global warming 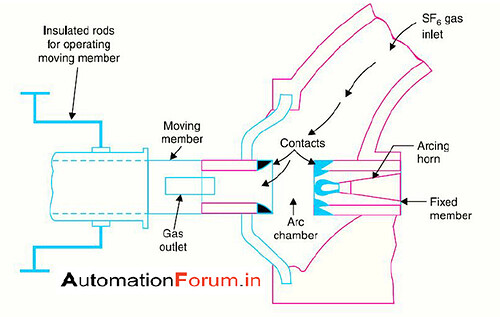 The contacts are surrounded with SF6 gas when the breaker is in closed position, the high-pressure flow of SF6 will absorb the free electrons which are in the arc path and thus it could form as immobile negative ions and by that the medium between the contacts builds up high dielectric strength and it will cause the extinction of the arc