A thermoelectric transducer is an active transducers, which doesn’t need any auxiliary power sources for it’s working. A thermocouple converts thermal energy into EMF. Thermocouple is simply made by joining two dissimilar conductor metal or semi-conductors.

There are mainly three rules which governs the behavior of a thermocouple.

Two dissimilar metal join to form a closed circuit and the junctions are at different temperature an Emf is developed. This emf is called is thermoelectric emf and this arrangement is called Thermocouple.

Releasing or absorption of heat at junction of thermocouple due to passage of electric current. That is, if the junctions of thermocouple kept at same temperature and if current is allow to pass through then one junction get heated and other get cooled.

When two parts of single conductor are at different temperature an emf is generated between them. The other two laws where about thermocouple or two different metals, Thomson effect consider about single metal. 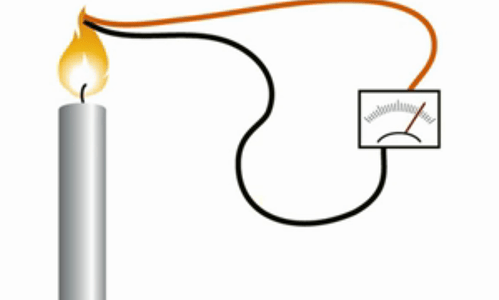 But an actual thermocouple does’t work like this. Because for a standard calculation, we need a reference temperature to which the measuring temperature should compare with. 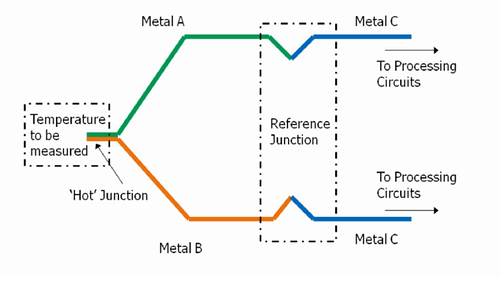 Here comes relevance of Reference junction / cold junction. The above picture illustrate a thermocouple set-up, but not the actual thermocouple.

Hot junction, which is the part of thermocouple subjected to heat.

Thermocouple shows the emf equal to temperature difference between hot junction and cold junction. The emf measured is given to processing circuit.

Different metal combination gives different range of emf. We can select for requirement.

How to costruct a Thermocouple device at home?: 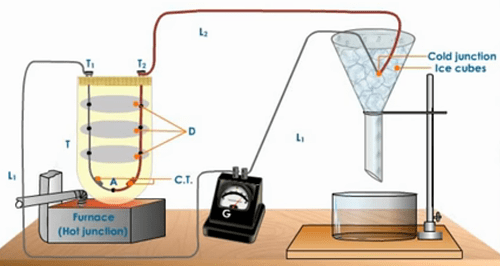 From the above figure, junction A forms the hot junction, only where two metals connected other parts should insulate properly. These two metals are passed through mica disc D inside a porcelain tube T. Two thermocouple wires are connected to lead wires L1 . Lead wires should be of same material. Believe me if you don’t have the porcelain tube set-up just connect the two dissimilar metal and insulate them. Dip one lead wire - thermocouple junction in ice, so it turns to our cold junction, we can connect other lead directly into Galvanometer. This forms our thermocouple set-up.

1 Like
What is Cold junction compensation in Thermocouple?
Why to choose intrinsic safety?
Thermocouple Circuit Considerations
How to reduce noise in thermocouple installation?
PLC input output connections and scan
Different thermocouple circuits
Instrumentation Interview Questions - Based on Temperature measurement