There are several variations in thermocouple circuits that solve or simplify some measurement problems. 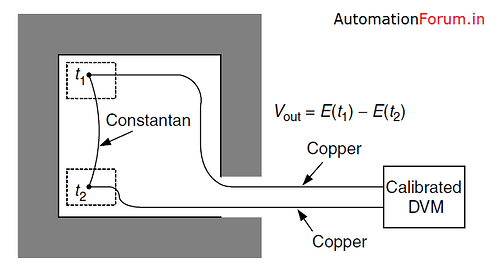 Type T is generally the first choice for a differential thermocouple because the copper leads can go directly to a meter.

In this case, the temperature gradient in an oven is measured using a Type T (copper-constantan) thermocouple. Note that the constantan is fully contained within the oven so it is not subject to large gradients of temperature. Rather, the two leading copper carries the signal to the meter. The copper leads are usually pure, so they do not have the same problems with inhomogeneity as alloy wires. 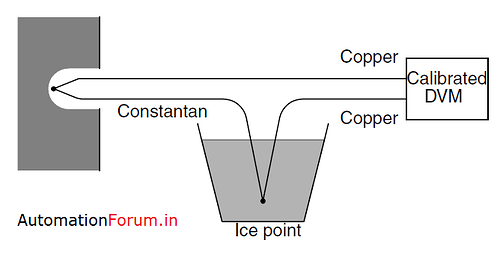 An apparently simple way to average the results of several thermocouples is to join them in parallel, and a number of standard test methods employ this technique. The output of the circuit is a voltage average, with the voltages weighted by the electrical resistance of each thermocouple circuit.

Consequently, it only represents a true temperature average when the electrical resistance in each circuit is equal and the thermocouple’s E(t) relationship is linear over the average temperature range.

In one leg of each thermocouple, parallel circuits sometimes use a resistor of about 500 ranges to balance the currents, but this introduces a major inhomogeneity into the thermocouple wire.

The method is only suitable as a monitor of wide temperature fluctuations or variations, and hence only a very low accuracy is expected

This is very informative.