There are different means for data to be exchanged between field instruments and the computer. Many of the instruments have a serial port, through which the information is sent to the computer or other instruments. The use of GPIB (General Purpose Exchange Buses) allows the transfer of data through parallel ports, serial ports and networks of instruments or computers.

TCP I/P is a computer language that used to provide access with the internet. The IP interfaces ensure the management of the protocols specific to each type of physical network. One of the roles that concern them is the fragmentation of the messages that are going to be issued: it is about dividing the messages to send them through a physical plot. The IP protocol is used for the exchange of information packets in unconnected mode: therefore it does not guarantee the correct arrival of the messages. This functionality will be introduced through the TCP protocol.

TCP is a connection-oriented protocol, which offers a secure information transport service (octets), the bytes that are issued from one side of the connection are released in the same order on the other side of the connection. This group of octets does not have any structure. The connection is made in duplex mode: therefore, it supports simultaneous communication in both directions.

A client is a program that directs a specific request to a server that corresponds to a service request. Thus, in the case of applications that communicate using these protocols, a request from a client will be sent to a server through a package that contains, in particular, a port number corresponding to the service and the port number where the client waits for the answer. 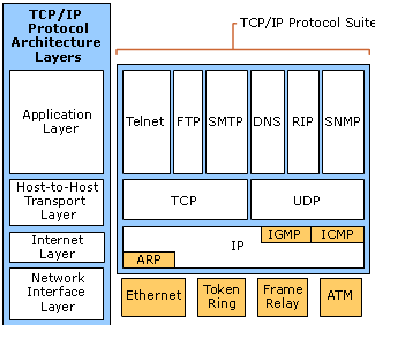 A layer consists of data link and physical layer. The function of the Data Link Layer is “provides for the control of the physical layer, and detects and possibly corrects errors which may occur”.

The function of the Physical Layer is to provide“mechanical, electrical, functional, and procedural means to activate a physical connection for bit transmission”.

It provides a set of interfaces for applications to obtain access to networked services as well as access to the kinds of network services that support applications directly.

The most widely known Application layer protocols are those used for the exchange of user information:

In TCP/IP, each application entity is composed of whatever set of function it needs beyond end to end transport to support a distributed communications service.

Most of these application processes builds on what it needs and assumes only that an underlying transport mechanism (datagram or connection) will be provided.

Transport is responsible for creating and maintaining the basic end-to-end connection between open communication systems, ensuring that the bits delivered to the receiver are the same as the bits transmitted by the sender.

Hosts use a discovery protocol to obtain the identification of gateways and other hosts attached to the same network (subnetwork). Gateways within autonomous systems (routing domains) operate an interior gateway protocol (intradomain IS-IS routing protocol), and between autonomous systems, they operate exterior or border gateway protocols (interdomain routing protocols). The details are different but the principles are the same.

2 Likes
Comparison between OSI and TCP/IP