Comparison between OSI and TCP/IP

What is OSI and TCP/IP?

The OSI is a referral or conceptual model of a communication network, which is used to compare with other networks.

TCP / IP is a protocol used to connect hosts through the World Wide Web. It is named from two of the most important protocols in it: the Transmission Control Protocol (TCP) and the Internet Protocol (IP).

This model is maintained by the Internet engineering task force. TCP / IP is a standard for all operating systems that are produced to allow everyone to connect through the web. Network operating systems must have their own protocols, such as Netware, although they still need to use TCP / IP to operate.

The OSI and TCP / IP models have similarities and differences that make them work in the most effective way possible. The main similarity between them is the way they are constructed because of both use layers. However, the OSI model consists of seven layers, while TCP / IP only consists of four layers. 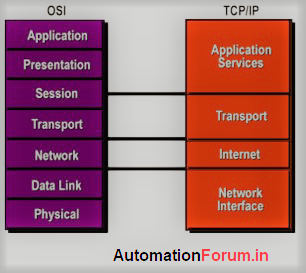 Another similarity is the fact that the upper layer for both models is the application layer, this is responsible for performing the same tasks for both layers, however, this may vary due to the information they receive. The functions performed in both models will be similar because both use a network layer and transport to operate. Both models are used mainly for the transmission of data packets, they will do so in different ways and by different paths, however, they will still reach the destination.

One of the main differences is that the TCP / IP model does not use the presentation and session layers to work and, therefore, a shorter root is needed to reach the application layer, while the OSI model needs them in order.

The OSI model also uses a physical and a data link layer, however the TCP/IP does not. This is because they are built within the network layer in order for it to work. Different layers:

The application is the highest level layer for OSI and TCP / IP. The application layer within the OSI model can be defined as the interface that makes it possible for a user to see the information he receives when he shows it on the screen.

The presentation layer within the OSI model is layer six and can be described as the data translator for a network. The presentation layer is responsible for ensuring that the data is delivered to the application layer and ensures that it is formatted correctly. Encryption is normally done within this layer, although it is also possible within other layers.

The session layer is layer five within the OSI model. This layer makes it possible for sessions between end-user application processes to open, close and manage. Communication sessions are made up of many requests and responses between applications that can then be opened and managed due to the session layer.

The transport layer is layer four within the OSI model and can be defined as the layer that provides communication services for applications. This is possible because it provides end-to-end communication and from host to host.

The network layer is layer three within the OSI model. This can be defined as the packet forward layer. The layer includes routing through intermediate routers. This makes it possible for the network layer to operate and transfer data streams of any length from one source to a destination through one or more networks.

The data link layer is layer two within the OSI model. This layer is responsible for creating multiple links through a network, this can be a wide area network or LAN (local area network). in the form of frames.