Ladder logic program for motor control is explained below. There are two motor M1 and M2 one allows forward rotation and the other one allows reverse rotation.

To keep the motor running even after the operator removed its control switch (s), we could change the circuit in several different ways: we could replace the pushbutton switches with toggle switches, or we could add more logic of relay to "Latch" the control circuit with a single momentary action of any of the switches.Here we are explained the second approach is implemented since it is commonly used in the industry. 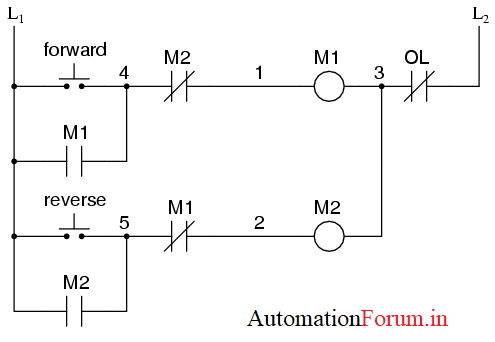 The same will happen when the “Reverse” button is pressed. These parallel auxiliary contacts in the switches are called latching contacts.

This is not the final design, Now we have to consider how to stop the motor.

To stop the Motors:

Since the circuit exists at this time, the motor will run forward or backward once the corresponding button is pressed and will continue to run as long as there is power. To stop any of the circuits (forward or backward), we require some means for the operator to interrupt the power supply to the motor contactors. We will call this new switch stop. 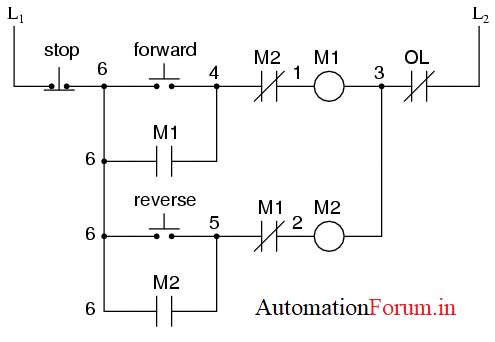 If we press the reverse button, while the motor running in the forward direction, the motor would struggle to overcome that inertia of the large fan when it tried to start turning in reverse, and it cause a reduction in motor’s lifetime and mechanical damages etc.

To overcome this problem we have to use time relay coils. What we want each time delay contact to do is open the starter switch section of the opposite rotation circuit for several seconds, while the fan stops. 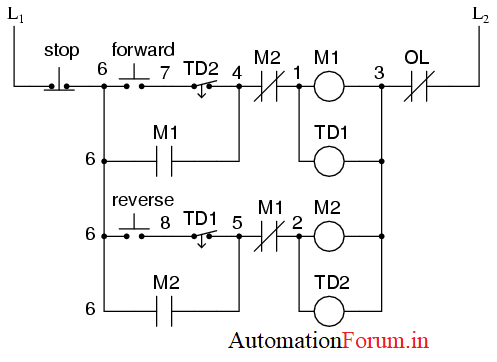 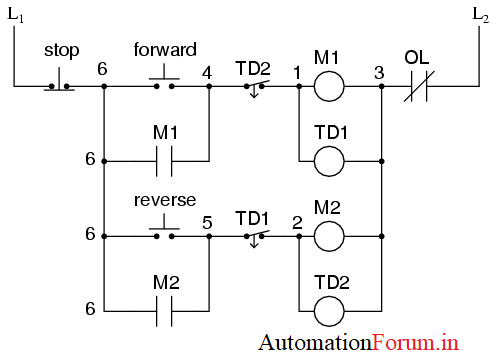 PLC ladder logic program for Cyclic Movement of a Piston