PLC ladder logic program for Cyclic Movement of a Piston

Consider the two 10s set timers. When the X400 start contacts are closed, the T450 timer begins. There’s also a Y431 output. The Y431 output is one of the solenoids used for valve action. It allows the pressure supply P to be applied to the right end of the cylinder when it is energized and the left side to be linked to the atmosphere with the ventilation.

The piston thus moves to the left. After 10 s, the normally open T450 contacts close and the normally closed T450 contacts open. This stops the output Y431, starts the timer T451 and energises the output Y430. As a result, the pressure supply P is applied to the left-hand side of the piston and the right-hand side connected to the vent to the atmosphere. The piston now moves to the right. 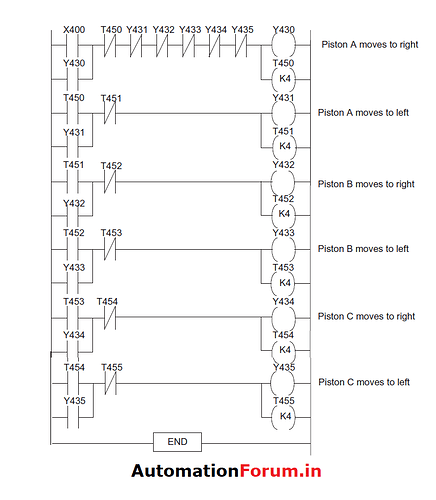 X400 is the option to begin. There is a Y430 output when it is closed and the T450 timer begins. The output will latch the start button. Piston A is moving correctly.

The normally closed T450 timer contacts open after the set time, K54, and the normally open T450 contacts close. This disconnects Y430 and energizes Y431 and begins the T451 timer. Piston A is moving left.

In rung 2, the contacts of the T450 are latched, so that the output stays on until the set time is reached. The usually closed T451 contacts open when this happens and the usually open T451 contacts close.

This disconnects Y431 and energizes Y432 and begins the T452 timer. Piston B is moving correct. Each succeeding rung activates the next solenoid. Thus in sequence, each of the outputs is energised.

What is Ladder diagram?