OSI is an abstract description of layered communications and computer network design, it standardized the communication function of telecommunication and a computing system. OSI models are considered as the primary architectural model for inter-computer communication. 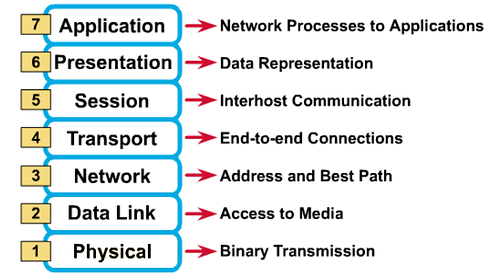 The process of breaking the function into seven layers is to reduce the complexity.The first three layers are media layer and the other four layers are Host layers. This model allows all network elements to operate together, no matter who created the protocols and what computer vendor supports them.

Each of the seven layers communicates with the same layer on the other computer. Data is encapsulated with the necessary protocol as it moves down the layer before the network transit.

All the seven layers have a distinct function:

The physical layer of the OSI model defines connector and interface specifications, as well as the medium (cable) requirements. The layer moves the data in the form of electromagnetic or optical signal across the transmission medium. It is responsible for the movement of data from one node to next.

Data link layer attempts to provide reliable communication over the physical layer interface. Layer 2 manages the ordering of bits, packets, to and from data segments. The ensuing result is called frames. Data links are responsible for moving frames from one node to another.

A data link layer Create and detect frame boundaries and detect an error and produce an acknowledgement and retransmit the data. Its responsibility includes, Packet addressing, Media access control, Format the frame used to encapsulate data, Error notification on the Physical layer, Managing of error messaging specific to the delivery of packets.

The network layer is responsible for the delivery of individual packets from the source host to destination host. It defines the most optimum path the packet should take from the source to the destination. If the message is too large to be transmitted from one node to another on the data link layer between those nodes, the network may implement message delivery by splitting the message into several fragments at one node, sending the fragments independently, and reassembling the fragments at another node.

Purpose of this layer is to provide a reliable mechanism for the exchange of data between two processes in different computers.This layer transport the data in a sequential manner with no loses.

Session layer provides a mechanism for controlling the dialogue between the two end systems. It defines how to start, control and end conversations (called sessions) between applications.The Session layer utilizes the virtual circuits created by the Transport layer to establish communication sessions.

It establishes, terminates, and monitors communication sessions between applications. Session layer is also responsible for terminating the connection.

Presentation layer defines the format of communication data is to exchanged between to system. And this layer is responsible for translation, Protocol conversion, Character set conversion, Interpretation of graphics commands, compression and encryption.