How to run multiple motors by using a single VFD?

VFD stands for Variable Frequency Drive. It is a device that is designed to regulate the consumption of power to the motors.

Can we connect multiple motors using a single VFD?

Actually Yes, we can control more than one motor by using a single VFD till the KW is matched and other parameters are set properly.

How to run multiple motors using one VFD?

While comparing multiple VFDs, a single VFD will produce a very much less amount of heat. 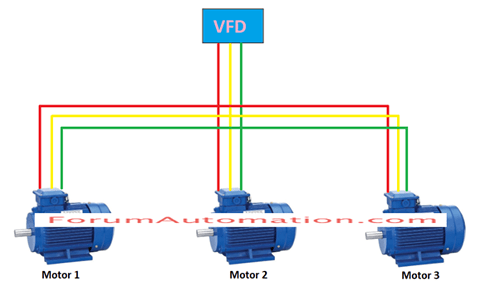 Here, we are going to discuss the designing criteria to run multiple motors by using a single VFD. They are

Just like the name implies variable frequency device has variable speed, so we can connect the multiple motors by using a VFD, all the motors have to run at the same speed at a time. So, make sure all the connected motors are running at the same speed simultaneously.

First, choose a VFD rating (Total Horsepower and Current) that is greater than the sum of all the motors’ total horsepower and current.

For example, if a three-set of motors and each one with a maximum current rating of 15A with a horsepower of 20HP, then the VFD rating must be 20% above of total current rating (45A) and horsepower(60HP).

When we are controlling a couple of motors through VFD, there is a chance of failure of one or more than one while working due to issues like short-circuit, overcurrent, etc, and the VFD will not go OFF because we selected a higher current rating VFD. To solve these issues, we have to install an overload relay or other protective measures for all the individual motor paths.

By using the overload relays, the operator can turn off the whole system even fault occurs in any one of the motors. It improves the safety of the system.

Check below image for reference: 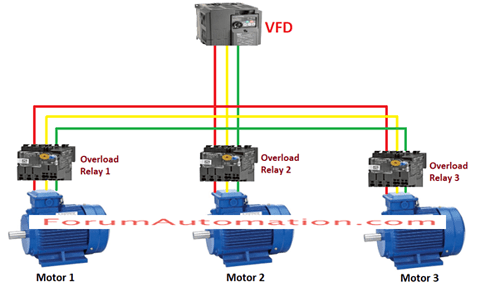 What is VFD sizing?

VFD sizing and selection become more difficult when a single VFD is used to control multiple motors unless all of the motors are started at the same time. Adding the horsepower of each motor to obtain a total load and selecting the VFD accordingly may not be sufficient depending on operating conditions when multiple motors are connected to one VFD.

Unless the selected drive is sufficiently oversized, one or more motors cannot be started up while one or more motors are already running. Consider the following scenario, which involves three 460 VAC motors connected to a single VFD.

Two of the motors have a 5 HP rating and a 6.2-amp full load amp (FLA). The third motor has a 10 HP rating and a 14-amp FLA. The sum of the connected motor FLA allows the use of a 20 HP drive if all motors are accelerated, decelerated, and run in unison. The FLA would have to be recalculated if it was necessary to accelerate and run the 5 HP motors before starting the 10 HP.

In the calculations, the FLA for each of the 5 HP motors would be used, but the locked rotor amps (LRA) for the 10 HP would have to be considered. A motor’s LRA is the amount of current it draws when it first starts up.

Because the 10 HP motor would not be accelerated from zero frequency and voltage to running condition, the drive would be viewed as a fixed voltage/frequency line starter, requiring the motor’s full LRA rating to quickly accelerate to the drive’s output frequency.

What are the design constraints and things to be considered while connecting multiple motors with a single VFD?

There are few things that must be kept in mind before controlling multiple motors using a single VFD. They are

Make sure all motors are working at the same frequency

VFD must be accommodated as a single point of failure in the design.

Connecting multiple motors using a single VFD makes a failure of a single point. If any failure occurs on VFD, then all connected motors will go to OFF mode. There are some methods to bypass these issues. However, it increases the cost and complexity of the system. Despite the fact that the VFD becomes a single point of failure, motor and connected load reliability improves in many applications because there are now multiple smaller motors rather than a single large motor. If one of the motors fails, the remaining motors can usually keep the machine running. In these cases, the remaining motors run at a VFD-controlled speed, allowing the overall system to operate at a reduced but still viable capacity.

Unless all motors are started at the same time, the VFD must be upgraded Need to start all the motors simultaneously with the same frequency to reduce the size of VFDs.The VFD controls the speed of all the motors at a controlled rate. The VFD also helps to reduce the inrush current required by each motor while starting.

Applications that use dual fans or pumps are ideal machines to meet the above three design criteria. The VFD can ensure that the two units run at the same speed and don’t end up fighting or carrying more weight than they were designed to carry. Air handling systems, exhaust/supply fans, make-up air units, recovery wheels, and fan arrays are all good candidates for a VFD-controlled installation.

After determining that the application meets the required specific conditions, the next step is the detailed design, which requires careful selection and application of the appropriate VFD and associated components.

Select the VFD based on the motors to be controlled.

Step 1: Calculate the sum of the total horsepower of the connected motors or FLA (Full Load Amps).

Note: FLA is better for selecting VFD than the total horsepower of the motor. But in some cases, FLA is not available.

Step 2: After the sum of FLA or horsepower is calculated, choose the VFD.

Note: VFD should be equal to or greater than the total horsepower or FLA.

All connected motors will maintain a constant speed under normal VFD operation, but only if the correct type of motor is used. As the load on a standard induction motor varies, it tends to slip in relation to the line frequency, so speeds will not be synchronous. The solution is to use three-phase, inverter-duty synchronous induction motors, which ensure that the motor speeds stay synchronized with the line frequency.

Each motor must have its own overload and short circuit protection, unlike a single motor connected to a VFD. When controlling a single motor, a VFD with the right features can often protect the motor from short circuits and overloads, as well as to detect an overcurrent situation if the conditions are right.

A VFD, on the other hand, only senses the total connected load and outputs as many amps as necessary up to its current rating. Because a single VFD can’t tell which motor is drawing a lot of currents when it’s controlling multiple motors, it can’t provide appropriate overload and overcurrent protection to each one.

The VFD can detect an overcurrent situation if one exists in the wiring from the VFD output to each motor overcurrent protection device because it is rated for the combined total FLA. However, each motor must have its own protection, such as overcurrent and short circuit protection.

If a motor draws more current than normal but less than eight times its FLA for an extended period of time, overload protection is used to disconnect it from the VFD. This prevents the motor and its conductors from becoming overheated. Bimetal and solid-state motor overload protection technologies are the most common.

Only the motor that fails is disconnected with individual motor protection, while the other motors continue to run. This is essential in applications where the entire system cannot be shut down while a single motor is repaired or replaced.

A disadvantage of controlling multiple motors, as previously mentioned, is that the VFD becomes a single point of failure for the entire system. By using a bypass circuit, this flaw can be overcome. 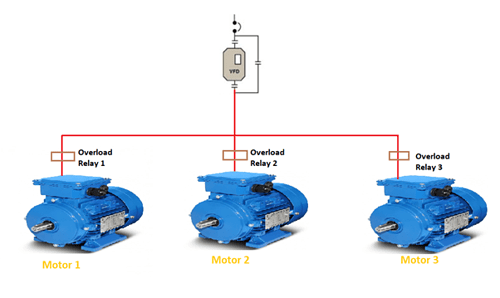 In the event of a VFD failure, the connected motors can continue to run using this three-contact bypass arrangement.

Engineers and companies are always looking for new and innovative ways to improve the performance and design of VFDs, motors, and connected load systems. Using a VFD to control multiple motors is a good option because it saves money, reduces space, and simplifies maintenance. Multiple motor configurations make sense in a variety of applications, from controlling two motors on a make-up air unit with a single VFD to controlling a large 14 motor.

What are the advantages of connecting multiple motors using a single VFD?

What are the disadvantages of connecting multiple motors using a single VFD?

How to run a three-phase motor by using single-phase power?