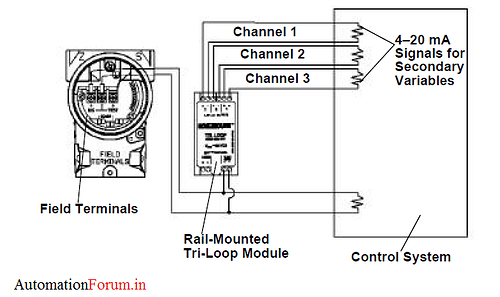 In existing controllers or transmitters in control loop may not have the ability to read the digital HART data, they works in 4-20mA current. There are HART Loop monitor devices that can read HART digital data and convert them into the analog signal, which allows the traditional control system to communicate with the HART communicating devices. 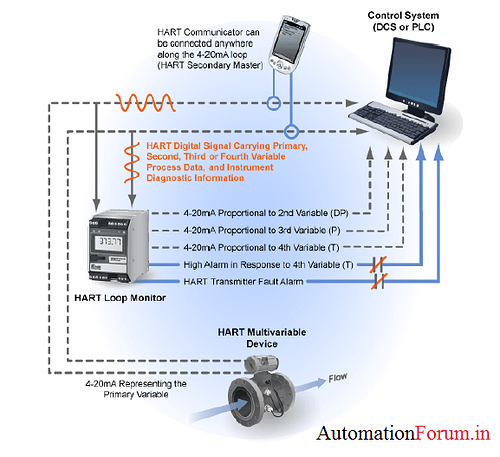 The digital signal produced by the HART transmitter is converted into an analog signal on the HART loop monitor. From the image above, it is a control loop of the mass flow meter. The mass flow meter measures three variables, temperature, pressure and differential pressure. Using them, they perform an internal calculation to derive the mass flow. The mass flow information is transmitted as a 4-20 mA signal to the control system. However, there is no way to continuously control the non-primary variables used to perform the calculation.

Installed transparently in the 4-20 mA instrument loop, the HART loop monitor reads HART digital data that is continuously transmitted on the analog loop cables of the smart transmitter and converts them into 4 20 mA signals that can be easily accepted by a DCS or PLC. This allows the continuous monitoring of a second, third and fourth variables of the multivariable transmitter.

The Moore Industries HART Loop Monitor (HIM) operates in either Normal (Poll/Response) Mode or in Burst Mode.