Primary master in the form of DCS, PLC, computer-based control center or monitoring system. A typical installation with two masters is shown in Figure: 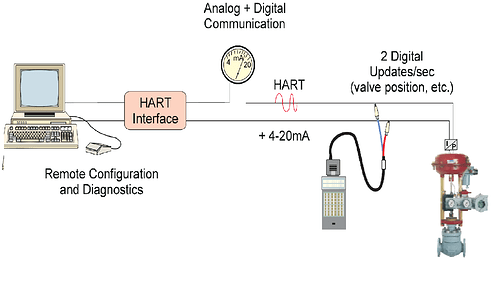 The HART protocol can be used in a variety of modes to communicate information to and from an intelligent field instrument with a control center or monitoring equipment. Digital master / slave communication along with 4-20 mA analog signals is the most common mode, as shown in Figure below, allowing digital information from slave equipment to be updated twice per second on the master. The 4-20 mA analog signal is continuous and can still carry the main variable for control.

“Burst” is an optional communication mode that allows one slave device to continuously transmit a standard HART reply message. This mode frees the master from having to send repeated commands to get updated variable process information.

The same HART reply message (PV or other) is continuously emitted by the slave until the master instructs the slave to do the opposite. The rate of update of data 3 ÷ 4 times per second is typically the communication of the “burst” model and will change with the selected command. The “burst” model is only used on a single slave equipment network.

The HART protocol also has the ability to connect multiple field equipment with the same cable pair in a multidrop network configuration as shown in Figure below. In multidrop use, communication is limited to digital master / slave only. The current through each slave equipment is fixed at the minimum price to power the equipment (typically 4 mA) and has no meaning relative to the process.

From one installation perspective, the same cable used for conventional 4-20 mA analog instruments carries HART communication signals. Permitted cable lengths vary according to the type of cable and connected equipment, generally up to 3000m for single shielded twisted cable pairs, and 1500m cable for many twisted pair shielding together. The unprotected cable can be used for short distances. The essential security barriers and separators that pass the HART signal are available for use in hazardous areas.

Here are some good ways to understand HART communication or HART protocol?