Used in flow meters for measurement of velocity of fluids. Using the principle of electromagnetic flow measurement, which does not need contact with the fluid measured. The measurement of flow velocities in hot and aggressive liquids can be done apart from measuring the velocity of solid materials and detection of structural micro-defects in them.

Also known as Lorentz force flowmeter, It measures the bulk Lorentz Force from interaction between the metallic fluid And Applied Magnetic field. For this the Magnitude of length of the magnetic field Is same as the channel dimension.

An electrically conductive fluid is exposed to a magnetic field.

A opposing force to the direction of the flow called the braking force is developed ,which is proportional to the accelerating force on the magnet.

Static flowmeters: Magnet system is at rest and flow rate is the measures of force acting on it. Rotary flowmeters: Magnets are arranged on a rotating wheel and the spinning velocity is a measure of the flow velocity. Depending on the magnetic field direction, the flow meters are classified as

Rotary LFF is either freely rotating permanent magnet or an array of magnets mounted on a flywheel which is magnetized perpendicularly to the axle it is mounted on. When placed adjacent to a pipe carrying an electrically conducting fluid the flywheel rotates such that the driving torque due to the eddy currents induced by the flow is balanced by the braking torque induced by the rotation itself. The rotation rate is proportional to the flow velocity and inversely proportional to the distance between the magnet and the pipe. Here either the torque on the magnet system or the angular velocity at which the wheel spins is measured. 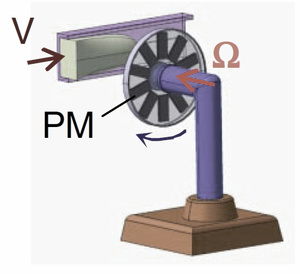 The effect on the magnetic system is measured using a strain gauge whose deflection is recorded using a interferometer. A deflection of less than 0.1 nanometer can be detected.

For fluids with low conductivity flowing within opaque structures at high temperatures and radiation, nonconductive flow meters are necessary. In such cases where the conductivity is low and the magnetic force is feeble, highly sensitive and precise force measurement system has to be developed. This is in the developmental stages using weights hung like a pendulum with high power magnets acting as the weight, the movement of these pendulum is recorded using an interferometer. To reduce environmental effects, dummy weights are used as compensation. Having them in a array amplifies the small measurement possible with low conductivity fluids. 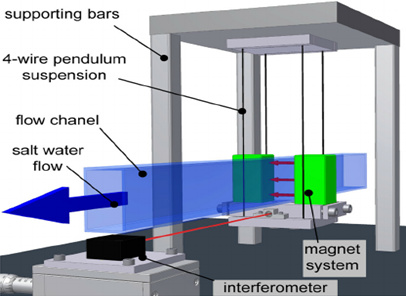 4. Fluid velocity when conductivity is unknown.

Time of flight Lorentz force velocimetry is used when the fluid under measurement has an unknown conductivity. It is designed to be independent of the fluid conductivity. It is made of one or two coils placed around a circular pipe. The forces produced on each coil are recorded in time as the liquid metal flows through the pipe and cross-correlated thus the forces can be used to determine the flowrate. Very useful in metallurgical industry where the conductivity of the fluid is almost always unknown.

For further reading go through this white paper