What is GE DCS?

A distributed control system (DCS) is a type of digital automated industrial control system (ICS) that uses control loops that are geographically scattered throughout a factory, machine, or control region.

In this article, we are going to discuss DCS developed by General Electric.

General Electric SE is a multinational corporation based in America that specialises in digital automation and energy management. It was founded in 1892. GE is most known for its contributions to the power, renewable energy, aviation, and healthcare sectors.

Mark VIe Distributed Control Systems are backplane-free and Ethernet-based, resulting in increased system availability and simplified operations and maintenance across the entire lifecycle. Ethernet connectivity is critical to the foundation of an Industrial Internet. 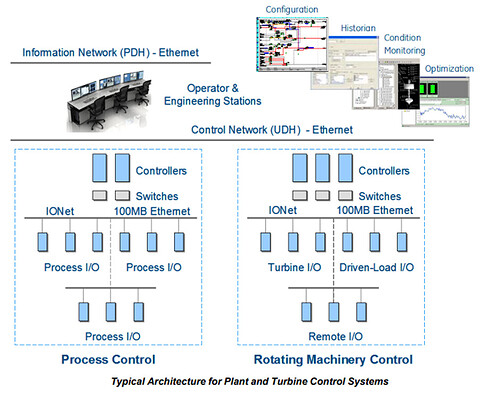 I/O can be distributed or centralised, and primary and secondary control can coexist on the same network while remaining functionally independent. Furthermore, the primary control may listen to safety inputs without being interfered with, lowering the cost of duplicating field instruments.

The system’s heart is a single-board controller. The controller contains the primary CPU as well as redundant Ethernet drivers for communicating with networked I/O, as well as additional Ethernet drivers for the control network. For the main processor and I/O modules, a real-time, multi-tasking operating system is employed. Control software is delivered in non-volatile memory and written in a flexible control block language. It is analogous to the IEEE® 854 32-bit floating-point format, and Sequential Function Charts (SFC) for sophisticated sequencing are also available.

The I/O network (IONet) is a point-to-point, full-duplex protocol. It provides a deterministic, high-speed 100 MB communications network for local or dispersed I/O devices, as well as communication between the main controller(s) and networked I/O modules. Online controllers read input data constantly from the IONet, which comes in single, dual, and triple redundant configurations. Copper and fiber connections are both supported.

The Mark VIe I/O modules are made up of three fundamental components: a terminal board, a terminal block, and an I/O pack. Barrier or box-type terminal blocks are put on a terminal board, which is mounted in the control cabinet on a DIN rail or base. The I/O pack has two Ethernet ports, a power supply, a local processor, and a data acquisition board. I/O capability grows as I/O packs are added to the control system, allowing use in a simplex, dual, or triple redundant configuration. Because some process subsystems require even more throughput, the local processors in each I/O pack run algorithms at greater rates as needed by the application.

On output-only modules and combination modules with discrete inputs and outputs, discrete outputs are accessible. Mechanical relays with dry form “C” contacts are the most commonly used because they can be used in AC and DC circuits with varying voltage ratings, provide normally open and/or closed contacts, have no leakage current, and have the versatility required for fusing, diagnostics, and solenoid suppression. There are several types of built-in solenoid interfaces available to save money on external, bespoke fusing and suppression.