A diaphragm valve is a linear motion valve that is used to start, regulate, and stop fluid flow. The name is derived from its flexible disk, which mates with a seat located in the open area at the top of the valve body to form a seal. Diaphragm valves are particularly suited for the handling of corrosive fluids, fibrous slurries, radioactive fluids, or other fluids that must remain free from contamination

Diaphragm valves can also be used for throttling service. The weir-type is the better throttling valve but has a limited range. Its throttling characteristics are essentially those of a quickopening valve because of the large shutoff area along the seat. 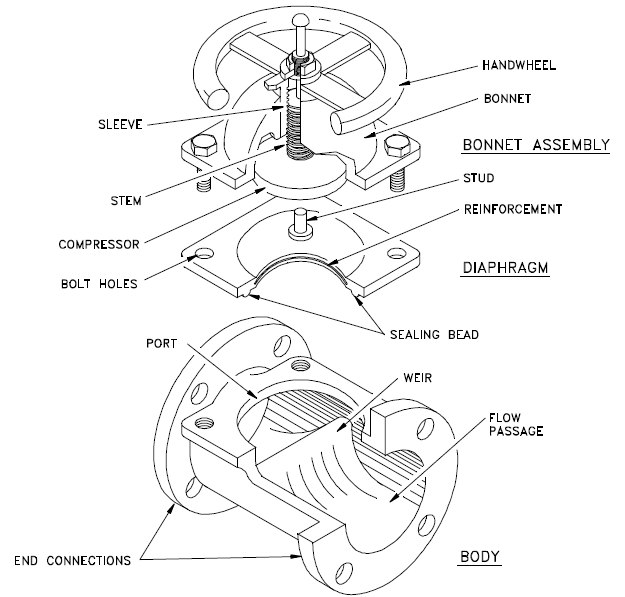 The fluid passing through the pipeline is isolated from the actuator of the diaphragm valve. The diaphragm work as a usual gate valve unless there is diaphragm fixed at the end of the plug attaching the gap. The diaphragm are made of elasitic material.

The elastomeric diaphragm materials may be unique in their excellent resistance to certain chemicals at high temperatures. However, the mechanical properties of any elastomeric material will be lowered at the higher temperature with possible destruction of the diaphragm at high pressure.

The diaphragm opens and close on the control action of the actuator. The three main position of the valve control is show above. Throttling is possible in diaphragm valve by using two-piece compressor component.

Hey do you want to know about Diaphragm box level meter

What is Control valve? Purpose of a control valve in a process loop
Self actuated pressure regulator characteristics