In order to prevent an explosion from electrical devices in a hazardous location, intrinsic safety is been employed in a preferred zone. The safety technique is based on the proper design of the system and intrinsic protection becomes a system concept.

The system designer should take responsibility for the adequacy of the design and the safety issues associated with the use of the system in hazardous areas. The relevant IEC system standard is IEC 60079-25.

Intrinsic Safety is based on the principle of preventing low-voltage circuits from releasing energy to cause an explosion in hazardous areas. Which is technically known as intrinsic safe barriers. 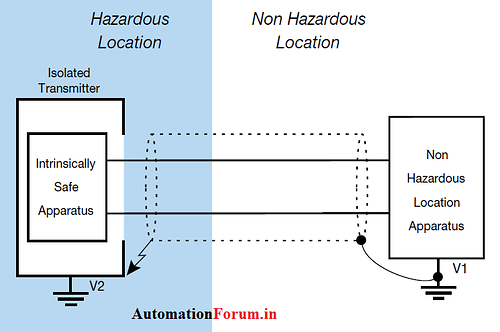 The Intrinsically Safe Barrier protects the field circuit in normal operation, and in the event of a fault, by preventing excess energy from reaching the dangerous area. We use the combination of a temperature transmitter and an intrinsically safe interface.

It is necessary to establish the compatibility of two pieces of equipment by comparing the data of each unit. Typically the series is the following.

The functionality of complex devices requires certain capacitance and inductance that can not be addressed solely by circuit design, other techniques must be employed at a system level to ensure that the temperature under all fault conditions can never rise to a value which may cause the ignition of explosive gasses.

Through improving the code, performance can be significantly improved. If it asked for more power than its size limit, the board would either throttle or trip a fuse. One way to reduce the assembly’s power consumption is to decrease the processor’s clock speed to reach the required threshold.

To create an end-to-end manufacturable device that provides the advantages of the traditional handheld instrumentation of today for an inherently safe environment requires a complete system approach to design. It begins with a clear capture of specifications that correctly describe the configuration of the device and all cases of use.

A complete solution that is fundamentally safe requires a view of the system, since tradeoffs can be made in different areas to achieve the final objective. As an extreme, a protective encapsulate can pot the entire board, effectively creating a container that is spark-proof. This is an expensive method.

In order to protect the resulting circuit in a manner consistent with IS requirements, in addition to the design and part positioning, InHand also designs encapsulation and conformal coating methods in compliance with the UL / ATEX certification guidelines. After the circuit design and layout is optimized to meet the functional operation and space requirements of the end-device.