DCS communication systems were first used in the process control industry to implement large-scale data acquisition systems, which at that time had grown to several thousand inputs in size. To reduce the cost of wiring, remote multiplexers located near the sensors in the field were used to convert the inputs to digital form and transmit them back to the data acquisition computer over a shared communication system. 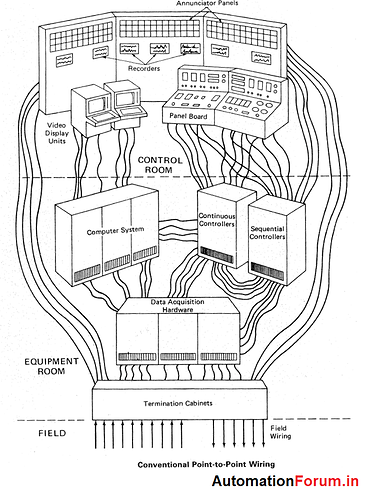 Maximum Delay: Time Through the System As mentioned previously, the delay time across a hard-wired connection is essentially zero on the time scale at which industrial processes operate since the signals travel at the speed of light.

Interactions between LCU Architecture and the Communications Facility: 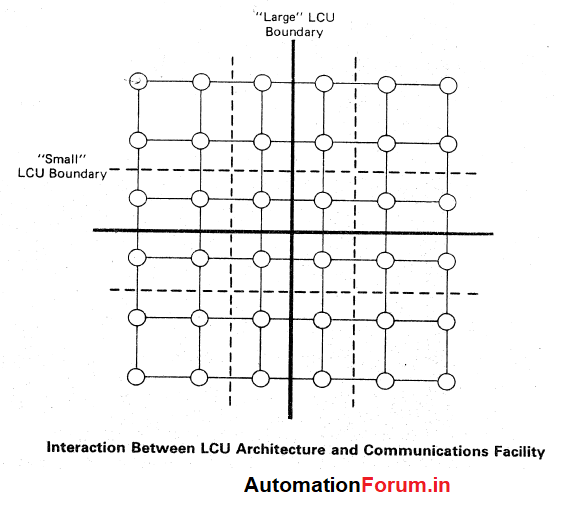 The lines connecting the circles represent the required transfer of an internal variable from one control function to another. Now, suppose that the LCUs are designed in such a way that each can implement a maximum of nine control functions In this case, the control logic shown in the figure would have to be partitioned along the solid lines shown, and a total of 12 internal variables would have to be transmitted from one LCU to another across the solid boundaries, using the shared communications facility.

On the other hand, if the LCU 15 designed to implement only four control units the control logic would be partitioned along the dotted lines shown in the figure. This would result in a total of 24 variables that would have to be transmitted from one LCU to another across the dotted lines, doubling the throughput requirements on the communication facility.

Interfacing Requirements: In most commercially available distributed control systems supplied by a particular vendor, the communication facility is designed to interface only with elements supplied by the same vendor. However, it is important that the vendor provide a mechanism (sometimes called a gateway) that allows connection to other elements using a generally accepted interface standard such as the RS—232C, RS—422, or IEEE 488 standards. 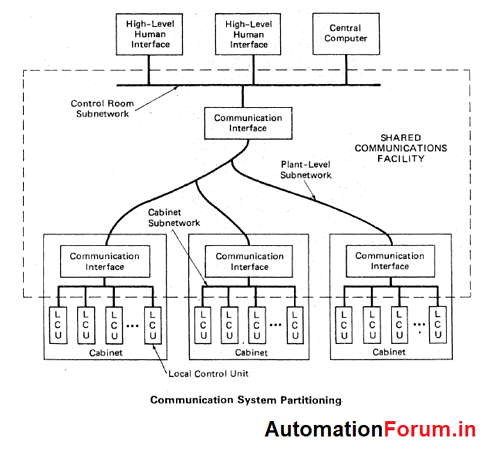 The latter elements are LCUs (e.g., single-loop controllers) that must communicate with each other at high rates within each process area The natural communication system partitioning that results from these requirements has three levels:

The first decision to make in evaluating or designing a communications facility is whether to choose a parallel or serial link as the communication medium. In the parallel approach, multiple conductors (wires or fiber optic links) carry a combination of data and handshaking signals (the latter control the flow of data between the nodes in the system).

The serial approach uses only a single coaxial cable, fiber optic link, or pair of wires. Given the same communication capacity on each link, it is clear that the parallel approach provides a higher message throughput rate than does the serial approach.

if the distance between nodes becomes large As a result, usually only applications requiring high data transfers over relatively short distances (examples are local computer buses and the IEEE 488 instrumentation interface standard) use the parallel approach. Most communication subsystems used in distributed process control use the serial channel approach especially in the long-distance plantwide communication subsystem

Connecting all the elements of the system multiple sub-systems are required. A subnetwork is defined to be a self-contained communication system that: