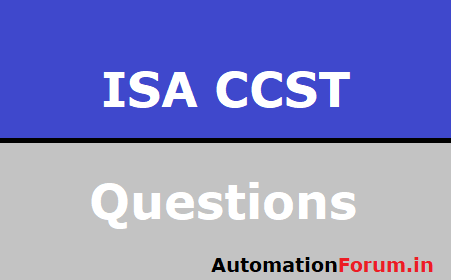 CCST is a certification course provided ISA for professionals who have proven they possess extensive knowledge of automation and control systems. Here are some of the CCST model questions.

The questions and options are given at the beginning and find the solutions of those questions at the bottom.

1. The following are all fundamental components of a PLC system EXCEPT:

2. With a DCS it is possible to switch from single-loop control of a process variable to cascade, ratio, feedforward, adaptive or multi-variable control ________ if all the peripheral hardware is installed in the field and connected to the DCS terminal board.

A. relocating the transmitters and FCE

B. reconfiguring the loop

C. installing a UPS and inverter

3. The continuous sequence of steps or “operating cycle” performed by a PLC processor is known as:

4. Design Standards are defined as standards which:

A. Are least able to be enforced by regulatory bodies.

B. Are imposed by agencies such as OSHA, etc

C. Have been agreed upon by various regulating bodies and refer to all aspects of defining quality and methods of fabrication or installation of materials and equipment.

D. Are developed by design companies.

5. Which of the following flow measurement devices does not require square root extraction?

6. A schematic representing a complete hydraulic, electrical, magnetic or pneumatic circuit is called the following:

A. Process and instrumentation diagram (P&ID)

A. in a reset windup condition

C. in a feed-forward control scheme

8. In ISA symbols on a P&ID (piping and instrument diagram), What depicts a solid line with three marks crossed by another hash mark?

9. What part of the test procedure should be done at FIRST?

10. A control valve with a direct-acting actuator and direct trim will:

11. Which of the following types of actuators responds to a pneumatic signal?

12. Changing the origin point for input data and the destination of the output signal is easy with a Distributed Control System because many changes can be implemented through:

A. Relocating wire jumpers in a junction box.

B. Changing the pneumatic tubing connections.

13. Which type of flowmeter measures flows by measuring volume directly?

14. What occurs if the temperature of the thermocouple measuring junction is lower than the reference junction?

A. There is no emf output.

B. The output voltage polarity is reversed.

C. The polarity stays the same, but voltage increases.

D. The emf remains the same when the temperature changes.

15. A ground loop on the shielded cable can be avoided by:

A. Attaching a safety ground to the instrument casing

B. Grounding the shield at only one end of the circuit

C. Attaching a safety ground to the control panel

D. Grounding the shield at both ends of the cable

The CRT monitor is not a basic component of the PLC system, But all the other options are needed for a PLC system

Scanning is the mechanism through which a device collects data for use in measurements from system sensors. It is the systematic interrogation of machines or data lists under the command of PLCs.

While the PLC can update values, survey devices and rectify process aspects in response to the data it encounters during its routine.

Loop diagram shows full details of a mechanical, electromagnetic, magnetic, or pneumatic circuit, showing all the interconnections, parts, and equipment used in that circuit.

P&ID shows just the interconnections of the process equipment.

A process flow diagram is a diagram that schematically describes a process and shows how much a plant will make of each material.

The behaviour of the controller operates in the form of modifying the system parameter, hence the term "direct-acting In a pressure control scheme, this type of controller will be used with a broken valve. As the pressure increases (controlled variable), the output of the valve would increase to open the valve to ease the pressure. 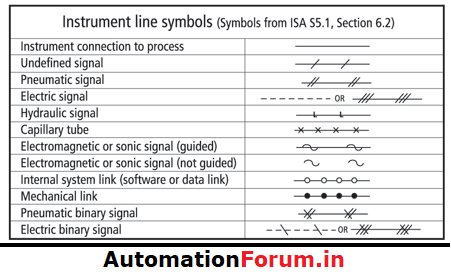 Every instrument under test should be visually inspected first.

When the signal rises, a direct actuating mechanism moves to the closed position. There is no warning and control when a failure occurs, and the direct valve fails to open.

Except for Diaphragm actuator, all others are electrical actuators. On the application of pneumatic signal to the diaphragm, it expands to the valve actuator.

While changing data input and output could be accomplished by performing A, B, and D, the entire beauty point in a distributed control system (DCS) is not required to go into the field to reconfigure the process.

A positive displacement flowmeter tests the flow by separating it into distinct liquid items or sets. Every product has a quantity that is known. The flow rate is determined by the number of discrete elements that travel through the meter per unit time.

When a thermocouple connects another conductor to the “hot” end of the first conductor, an additional conductor also experiences the temperature gradient and develops a voltage of its own that is opposed to the original.

A ground loop refers to an unwanted electrical current in a conductor. Potential is the difference between two points of voltage. A surface with a voltage equal to 0 (zero) should be one of the scales. The best way to avert the ground loop in this question is to ground the shield at only one end of the circuit.