To install a cable in a conduit, pull one end of the conduit to the other with a strong cable. When pulling a cable to a conduit, there are maximum tensile stresses that the cable can withstand without damage. This process of installing is Rigging.

The method used to rig the cables to pull the overvalued conduits and the cable tray systems depend on the length of the pull and the size of the conductors to be installed.

Suitable pulling equipment that is in good working condition should be on hand for the pulling operation.

[image] The pulling parameters of the cable include the maximum pulling stress and the side wall pressure calculations. The voltage calculations take into account the maximum permissible voltage that the traction device and the conductors can withstand. The calculation of the side wall pressure takes into account the stress effects that a curve in the conduit or cable tray has on the cable during the extraction operation. The general procedure used to determine the tensions and tensile parame…

The cable reels must be supported by an axle at the installation location so that the cable can be pulled with minimum friction: 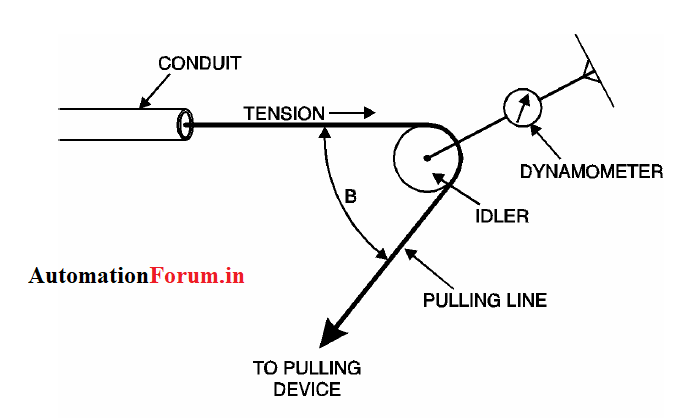 To measure the tensile stress that is applied to the cables, a dynamometer is often used during the traction operation. The dynamometer can be connected at the feed end of the duct or at the discharge end of the conduit.

An idler is connected to the dynamometer at the feed or discharge end of the conduit, and the traction line and/or the cable is routed over the guide wheel to allow the tension applied during the traction operation to be measured.

In addition to reducing friction, the selection of the correct diameter pulley for the job guarantees maintenance of the minimum bend radius of the cable.

Short curves of the cables, sharp edges in the runway feed and cable crossings at the point where the cable enters the runway should be avoided. The electrical engineer must make sure that the diameter of the pulley used for the installation is large enough so that the pressure of the side wall that is exerted on the cable does not exceed the limits. Sidewall pressure (SP) is defined as the crushing force exerted on a cable as it is pulled around a curved section of the conduit.

Supports should be used to alleviate stress on the cables where they enter the conduit or cable tray.

The cables must be placed or pulled from the cable guides. When the cable is pulled through a cable tray, rollers, pulleys and pulleys must be used to prevent cable damage.

If the pulleys, pulleys and rollers that are used for cable installation in cable trays have a smaller size, the cable can be damaged if it is bent below the minimum bending radius allowed.