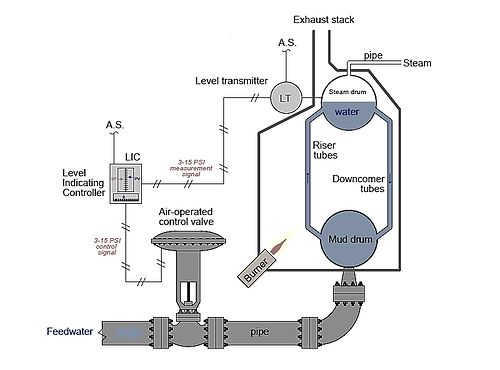 From the above figure, it is clear that a pneumatic control system works to control the level of water in the boiler. The LT (level transmitter) measures the level of water in the boiler and transmits the signal pneumatically in 3-15psi, to the controller, which is also an indicator of level, A 3-15psi control signal is produced by the controller comparing the measured signal and the setpoint.

The control valve is the final control element in the system, which is implemented to influence the flow rate of water. The control signal is produced either to open or close valve otherwise increases or decrease the flow of the water to the boiler.

How to increase Boiler efficiency?

To know about Level Measurement Errors

Nice artical. Can you also describe more about the single element and 3-element control to control the steam drum level.

In process industries, boiling water to make steam is an important process. The boiling drum is where the boiling water is converted to steam, so that maintaining the level of the drum is an important process. Controlling the level is critical because if the level becomes too low, the drum heats up in dry results in damaging the mechanical components. And if the level becomes too high, water can be carried over into the steam pipework, possibly damaging downstream equipment. There are types of…

What is the best measurement level for a boiler?. What type of them.