What is a circuit breaker?

Circuit breaker is a device designed to open and close a circuit using a non-automatic (manual) as well as opening the circuit (tripping) automatically at a predetermined over-current level,without injury to itself when properly applied within its rating.

Using the operating lever to open and close the circuit. 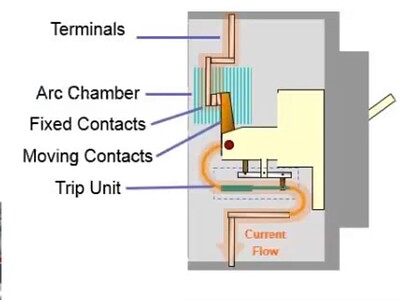 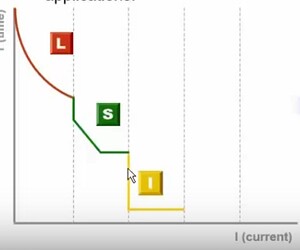 Over load Condition- excessive current condition resulting from an increase in the load applied (beyond set limit).

Correlates to the first part of the curve (L - Long delay)

During an overload,the excessive current through the breaker will generate heat.

The higher the heat the shorter the trip time.

The heat generated from an overload condition causes the bi-metallic element to bend,tripping the breaker.

Correlates to the second part of trip curve (I-Instantaneous )

During a short current flow can becomes thousands of times greater than the normal operating amperage.

A breaker short circuit current rating indicates the amperage value at which the breaker trips instantaneously.

The magnetic field generated from a short circuit attracts the trip mechanism to the element,tripping the breaker.