WHY SHOULD WE USE DISTRIBUTED CONTROL SYSTEM

WHAT IS A DISTRIBUTED CONTROL SYSTEM

An important feature of the DCS is we can control devices from the control room with the help of remote communication, it has the processors which can process the signal very fast and it also commands the field devices in DCS each machine is controlled by its own controllers. It has a large number of controllers in various section. 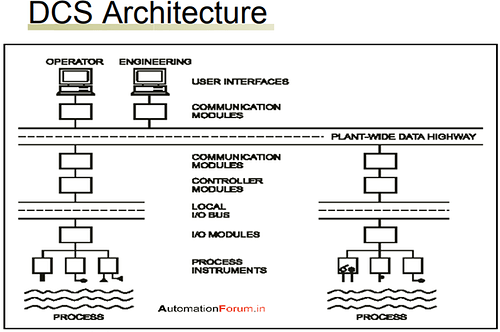 DCS is mostly depended on computer technology so it is software intensive. to control various process it has control valves, VFD motors, pumps…

WHY DO WE NEED DCS

DCS is used in a large continuous process plant, which requires high reliability and security, for a plant that has a large number of control loops DCS can be used as a computerized control system by using DCS we can get reliability and reduction in installation cost can be seen

DCS is commonly used in

DCS is connected to control elements such as temperature and pressure transmitters, flow meters, gas analyzers and many others from these field devices it receives electrical signals and the DCS will convert these signal and after converting it is used by computers to

The communication medium will be a cable or wireless link that does the connection in the DCS to the central control facility, a network is a collection of computer and other devices and thus we could share the modems, printers, and the computer and thus the data transfer will take place too

ROLE OF COMPUTER IN DCS

All the information in DCS is in digital form because it is computerbased and so it can combine analog control loops with discrete logic. DCS can involve many inputs, outputs, control loops and it is used to check the sensors and it can characterize the input signal and alarm them and thus it could evaluate the plant many times.

I use it all the time at my place of work, a thermal power plant!