Why is Marine Growth Prevention System (MGPS) essential for ships?

Why is Marine Growth Prevention System (MGPS) essential for ships? 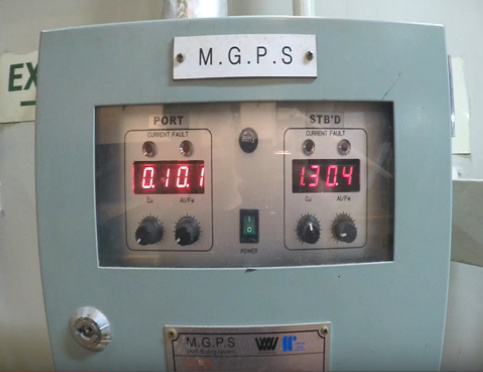 Bio fouling is a world wide problem leading to the blockages which increase the fuel consumption and result in expensive and time consuming maintenance work. 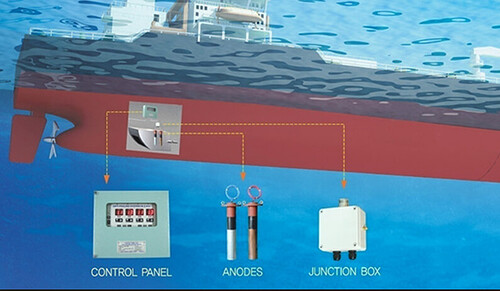 Ships during navigation use seawater for various purposes. Seawater is used in the ship’s system and discharged after use.

However, seawater contains several marine organisms that enter the ship along with seawater and settle and flower in parts of the ship’s system.

If preventive measures are not taken, marine growth can cause damage to the particular part in the long term.

Marine inlays can form large marine growth groups within the ship’s piping system. This is mainly due to the entry of seawater into the seawater system.

The organisms find the perfect place within the system where the environmental conditions and other relevant factors such as temperature, ph, nutrients, etc. they are appropriate for reproduction and dissemination. 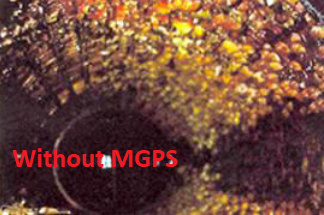 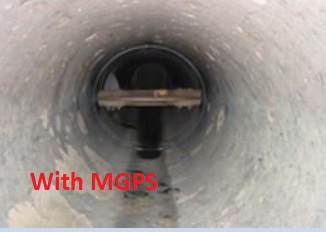 As the marine organisms flourish they block and narrow the passage of cooling water in the ship’s system resulting in the following factors:

– Increase in the rate of corrosion and thinning of pipes.

– Reduced efficiency which can lead to loss of vessel speed and loss of time.

Description and working of MGPS is as follows.

The basic principle in which MGPS runs is electrolysis. The process involves the use of copper, aluminum and ferrous anodes. The anodes are usually fixed in pairs in the main chest of the sea or in a place where they are in the direction of water flow. 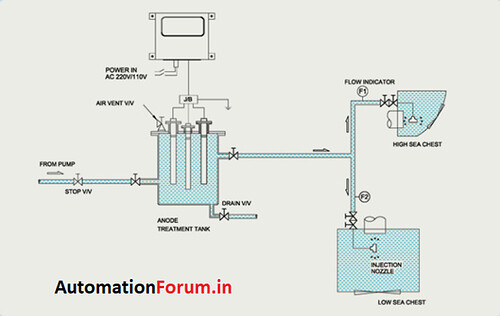 The system consists of a control unit which supplies impressed current to anodes and monitors the same. While in operation, the copper anode produces ions, which are carried away by water into the piping and machinery system. Concentration of copper in the solution is less then 2 parts per billion but enough to prevent marine life from settling.

Due to the printed current, the aluminum / ferrous anode produces ions that extend over the system and produce an anticorrosive film on the pipes, the heat exchanger, the valves, the refrigeration and the air conditioning unit, etc., internally . 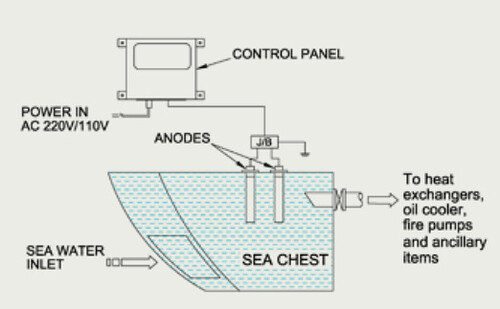 • MGPS is based on the electrolytic principle and consists of copper, aluminium and ferrous anodes which are fed with an impressed electrical current from a control panel.

• The anode are usually mounted in pairs in the ship’s sea chest or strainer where they are in direct contact with the flow of water entering the seawater lines. Also the anodes can be mounted on independent treatment tank for other convenience.

• In operation, the copper anode produces ions which are transported by the seawater and carried into the pipework system and equipment beyond.

• Although the concentrations of copper in solution are extremely small i.e. less than 2 parts per billion they are sufficient to prevent marine life from setting and multiplying.

• At the same time, the slow dissolution of the aluminium / ferrous anode produces ions which spread throughout the system and produce an anticorrosive layer on the internal surface of pipes.

The benefits of this MGPS system are:

• Easy installation during new building or as retrofit

• No hazardous materials such as with chemical dosing systems