WHY BREAKER FAILURE PROTECTION IS REQUIRED

FAILURE TO TRIP in this situation the contacts of the breaker don’t open after energizing of the trip circuit by the protective schemes, this can happen by an open or short in the trip circuit wiring or the trip coil

In this situation, the contacts of the breaker would be open but the arc is not extinguished, and the current will flow it could be caused by the mechanical or dielectric problems

CONTACT FLASHOVER An open breaker could lead to massive failure, it could be caused by a restrike of an opening breaker or a surge through an already open breaker 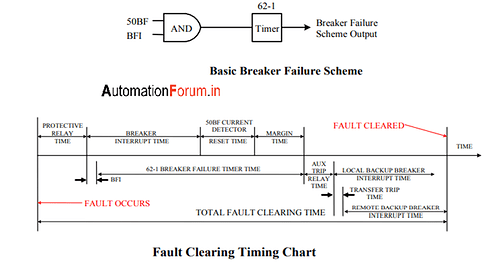 To monitor proper breaker operation two conditions are used they are

BREAKER FAILURE WITH RE-TRIP LOGIC By the help of the re-trip design, the breaker would get a second chance to trip before a breaker failure is declared

in case of circuit breakers which has two separate trip coils, if one the trip does not function well then it can be designed to activate the re-trip, this logic can be used to energize the second trip coil and the breaker is opened before declaring a breaker failure condition.

The re-trip output contacts operating speed must be accountable for the overall time delay settings, the design logic of the re-trip is independent of the normal breaker tripping scheme. If the breaker is tripped by re-trip logic there could be some fault in the initial trip path, automatic breaker reclosing can be blocked by the re-trip output breaker tripping, to allow the maintenance inspection to find the problem.