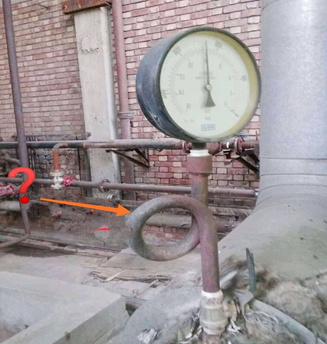 Its full name is the Pigtail siphon. Pigtail siphons are looped pipes filled with water that is placed in piping configurations directly before an instrument gauge, normally to measure steam pressure, in order to shield steam and possible surges from the gauge’s sensitive mechanics.

Pigtail siphons are used to reduce the process temperature at the gauge or instrument in order to prevent thermal damage to the pressure instrument. It is used only with vapor process media that condense to liquid at cooler temperatures, like steam that will condense to water.

The siphon’s bare metal is exposed to ambient air which cools the process fluid (usually steam) inside the siphon. The cooled process medium then condenses to liquid and collect in the lower half of the pigtail loop/circle. The liquid serves as a buffer to prevent the steam from directly impingeing against the pressure sensor element - bourdon tube/bellows/piston. This action prevents the steam from damage and thermal shocking the instrument sensor element.

When serviced or installed, the siphon should be manually filled with the condensed process liquid.