What is ZigBee? & ZigBee PRO

ZigBee is a standard set of high-level communication protocols defined by the ZigBee Alliance for wireless networks. The organization’s task is to identify reliable, cost-effective, low-power, wireless networked goods, monitor and control goods based on an open worldwide standard.

The ZigBee Network Layer and the ZigBee Application Layer are defined by the protocol stack. They create on the IEEE 802.15.4 normal physical and medium access control (MAC) layers. ZigBee describes application profiles (government, private and released) in addition to the application layer. 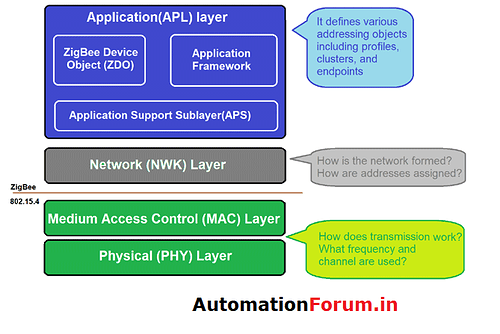 The application layer is the largest specification-defined layer and is the interface between the ZigBee scheme and the customers. Its most important elements are:

Application framework: Provides an environment in which applications execute.

ZigBee device object: Responsible for defining the role of the device.

Application support sublayer: The interface between the network layer and application layer.

The node address assignment is an instance of enhancement in ZigBee PRO. ZigBee initially used a “cluster-tree” routing algorithm where a coordinator node acts as the network’s root and address tree and nodes are given addresses based on the coordinator’s place.

This enables comparatively easy routing algorithms, but in several circumstances can cause issues.

This could result in addressing exhaustion on long branches in big networks. Changes to the tree topology could lead to big areas of the network being re-addressed.

ZigBee PRO implements Stochastic Addressing that allows nodes to randomly pick an address when joining the network and in case of an address conflict (two nodes with identical addresses) the unique MAC address will be used to tell.

ZigBee PRO has a Frequency Agility feature which implies the application can transfer the entire network to a better channel. The channel with the least noise and traffic will be used when the network is established.