What is Valve Trim? 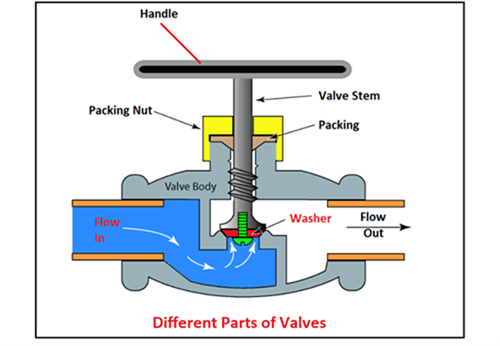 Valve is a device that is designed to control the flow of fluid, liquid, gas, or air through a duct or pipe, etc.

The main parts of the valve are

Some of the valve’s removable and replaceable internal elements will come into direct touch with the fluid flowing through it. These inside valve pieces are referred to as valve trim.

What is the Control valve stem?

What is Poppet valve and How it works?

What is Valve Trim?

Valve trim refers to the removable and replaceable internal portions of the valve that come into contact with the flow medium. All valves share the same disc, valve seat, and stem.

Valve Trim components will vary depending on the type of valve. A back seat, glands, spacers, guides, bushings, retention pins, and internal springs are all part of the valve-specific trim. The gate valve trim pieces are seen in this shot. Disk movement and flow control are feasible due to the trim components.

The operational characteristic of the valve varies when the valve trim is shaped. For example, the plug profiles of a stem-guided globe valve can be quick-opening, linear, or equal-percentage.

At any point along its characteristic curve, the equal percentage valve plug produces the same percent change in flow for each fixed increment of valve stroke. High specification applications frequently use this kind of valve trim.

The linear profile produces step-wise equivalent variations in flow per unit of valve stroke, regardless of plug position. In systems where the valve pressure drop represents a sizable portion of the overall system pressure drop, linear plugs are employed.

The first part of the valve trim is a disc. The disc is the element that, depending on where it is positioned, either permit, restricts, or prevents fluid passage. The type of disc is frequently the source of the valve’s name. Examples include valves with discs that have the same form as their namesakes, such as gate, ball, plug, and needle valves.

A valve disc can be machined, cast, or forged. In order to increase wear resistance, the sealing face of the valve disc is periodically toughened. The valve disc is a pressure-maintenance component; hence the disc needed a smooth machining surface to reduce friction with a seat.

A disc rests against the stationary valve seat when the valve is closed. The stem can be moved manually or automatically.

The handwheel/actuator and the disc are connected via the stem. The movement of the stem causes the valve disc to move and adjust. The disc, plug, or ball must move in order for the valve to open, close, or be adjusted, and this motion is provided by the valve stem. The stem joins the disc at one end of the valve to the actuator, handwheel, or lever at the other.

In gate and globe valves, the disc moves linearly to open or close the valve, whereas, in plug, ball, and butterfly valves, the disc spins. Stems often attach to the disc by connectors or other mechanical ways and are made of stainless steel.

One of the valve’s non-pressures retaining components is the valve seat. Valves may have one or more seats. For example, in the case of a globe valve or swing check valve, one seat will establish a seal with the disc to halt the flow. As opposed to the gate valve, which has two sitting surfaces in contact with the seats. The number of seats for plug and ball valves will vary based on the number of ports.

Rings that are inherent, renewable, or changeable can serve as valve seats. Large valves may have any of the seats used in small valves, as well as integrally cast or forged seats along the length of the valve body. Small valves are offered with screwed-in, swaged-in, or welded valve seats. The efficacy of the seal is directly inversely proportional to the leakage rates inside the valves.

Another component of the valve that does not maintain pressure is the back seat. A stem shoulder serves as the foundation of the back seat. The stem creates a seal when it is fully extended. As a result, the valve shell’s leaking into the packaging chamber, and the environment is stopped.

Yoke is another name for yoke arms. A yoke connects the valve’s actual mechanism to the valve body or bonnet. The yoke and the bonnet are built as a single piece to cover multiple valves. The yoke nut and yoke bushing are located on the top side of the yoke.

The Yoke is constructed tough enough to endure the forces, moments, and torque generated by the actuators.

It is the area where the valve stem enters through the top of the yoke and the internally threaded nut is held in place. Depending on which way the nut is rotated, the stem moves up and down in certain valves, such as gate and diaphragm valves. The yoke nut is positioned permanently over some valves, and the stem is rotated via it.

The yoke bushings are composed of softer material than the stem in order to need the least amount of effort to operate. On the valves that need a lot of effort to open or close, anti-freeze yoke sleeve bearings are provided. By doing this, the friction between the yoke bushing and the toughened stem will be reduced.