What is Valve sequencing?

Sequencing of the two valves (i.e. making each one respond differently to the same air pressure signal), therefore, was a matter of setting each valve to a different bench-set pressure range. It should be understood, however, that setting up two control valves with different bench-set ranges is not the only way to split-range a pair of valves. Other ways exist as well, each with its own advantages and disadvantages. 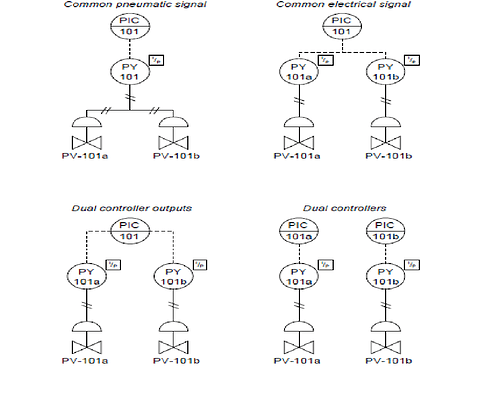 The common pneumatic signal approach (one controller, one I/P transducer) is simple but suffers from the disadvantage of slow response, since one I/P transducer must drive two pneumatic actuators. Response time may be improved by adding a pneumatic volume booster between the I/P and the valve actuators, or by adding a positioner to at least one of the valves. Either of these solutions works by the same principle: reducing the air volume demand on the one common I/P transducer.

A disadvantage of the series-wired I/P strategy is the extra burden placed on the controller’s output signal circuitry: one must be careful to ensure the two series-connected I/P converters do not drop too much voltage at full current, or else the controller may have difficulty driving both devices in series.

Another (potential) disadvantage of series-connected valve devices in one current loop is the inability to install “smart” instruments communicating with the HART protocol, since multiple devices on the same loop will experience address conflicts. HART devices can only work in hybrid analog/digital mode when there is one device per 4-20 mA circuit.