What is tidal energy and how does it work

What is tide and tidal energy

The sun and the moon exerts a gravitational force on the earth’s bodies of water and it will create periodic shifts in the water bodies these shifts are called tides. Tidal energy is a form of hydropower that converts the energy of tides into a useful form of power, mostly electricity. Tidal energy is a renewable source of energy which doesn’t have any environmental impacts like other sources of electricity like fossil fuel and nuclear power. Tidal power works because of the moon’s rotation around the earth. Tidal power is the power from the earth’s oceanic tides, the tidal force can be considered as the periodic variation in gravitational attraction exerted by celestial bodies and these forces create corresponding motions or currents in the oceans of the earth. The surface water of the ocean pulled away from the earth on the side facing the moon, at the same time earth is pulled away from the water in the opposite direction and that’s how tides occur. In some shore-lines there could be two equal high tides and low tides each day and this phenomenon is known as semi-diurnal tide and in other locations, there would be only one high and low tide and it is called a diurnal tide. In certain locations there would we two uneven tides a day or sometimes one low and one high tide each day and this is called a mixed tide.

Why we use tidal energy

How do we use tidal energy and how does it work

Tidal energy is a form of ocean energy, there are certain ways to produce tidal energy they are tidal stream generator, tidal barrage, and tidal lagoons.

Tidal turbines are very similar to wind power generation, there will be underwater turbines, so when water flows across the turbine blades the turbine will turn as the wind turns the blades of wind turbines. Basically the water current turns the turbines, which in turn activates the generator that produces the electricity. This type of system works very well in places where strong tides would appear so the installation of the turbines must be in strongly tidal areas. The initial coast of this tidal system is very high and the installation and maintenance coast is high too. There are two methods of tidal energy extraction they are horizontal and vertical axial tidal current turbines. In the horizontal type, the turbine blades rotate in the horizontal axis which is parallel to the direction of the flow of water. The vertical type of turbine blades rotates in a vertical axis which is perpendicular to the direction of the flow of water. 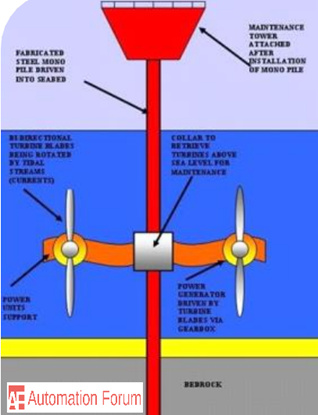 It is a dam-like structure which is constructed across the bay or river, to utilize the energy of water. These dams are similar to the dams in hydroelectric plants and the difference is that tidal barrages are much larger because they are built across the bay. The tidal range must be in excess of five meters for the barrage to be workable. When the tide comes water flows through the dam into the basin and when the tide stops the gates are closed, which traps the water in the basin. So when the tide goes out the gates in the dam which contain the turbine is opened and the flowing water passes through the turbines thus generates electricity. Construction of these dams is very costly.

Tidal lagoons are similar to the tidal barrage, except they have less coast. They are self-contained structures cut-off from the rest of the sea. Working of the tidal lagoons is similar to the tidal barrage when the tide rises the lagoon fills and when it falls the water is released through the turbine. They are constructed as circular retaining walls embedded with turbines which can capture the potential energy of tides.

What are the components of tidal power plant

Turbines – they are the components that convert potential energy into kinetic energy. It is located in the passageways so that water flows through when the barrage gates are open.

What are the advantages of tidal energy

What are the disadvantages of tidal energy