What is a thermal power plant? 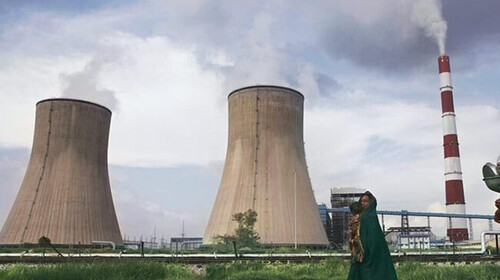 A thermal power station is a type of power plant that uses heat energy to generate electricity. Typically, fuel is used to boil water in a large pressure vessel to produce high-pressure steam, which drives a steam turbine linked to an electrical generator. The low-pressure exhaust from the turbine is recycled to where it was heated via a steam condenser. This is known as a Rankine cycle. Natural gas can also be burned directly in a gas turbine, which is also linked to a generator.

The working principle of a thermal power station is “heat released by burning fuel, which produces (working fluid) (steam) from water.” In Thermal Power Plants, the generated steam powers the turbine, which is coupled to a generator and produces electrical energy.

How does a Thermal power plant work?

When high pressure, high-temperature steam rotates turbine blades, the steam loses energy. As a result, the turbine’s outlet will have low pressure and low-temperature steam. Steam is expanded here until saturation is reached. Because there is no heat addition or removal from the steam, the entropy of the steam should remain constant. This shift is depicted in the p-v and T-s diagrams below. If we can return this low-pressure, low-temperature steam to its original state, we will be able to generate electricity continuously.

Compressing a gaseous fluid requires a large amount of energy, so the fluid should be converted into a liquid state first. A condenser is used for this purpose, which rejects heat to the environment and converts steam to liquid. Because the fluid in a condenser is free to expand, there should be no pressure change during this heat rejection process.

Because the fluid at the condenser’s exit is liquid, we can use a pump to increase the pressure. Because the fluid is in a liquid state, the volume and temperature (2-3 degrees Celsius rise) of the fluid hardly change during this process. The fluid has now returned to its original pressure.

External heat is applied to the fluid in order to return it to its original temperature. This heat is introduced via a heat exchanger known as a boiler. Because the fluid is free to expand in heat exchanger tubes, the pressure of the fluid remains constant. As the temperature rises, the liquid transforms into vapor and returns to its original temperature. This completes the Rankine Cycle, which is the thermodynamic cycle of a thermal power plant. This cycle can be repeated indefinitely, allowing for continuous power generation.

A boiler furnace is used to add heat to the boiler. Here, the fuel reacts with the air, producing heat. Coal or nuclear fuel can be used in a thermal power plant. When coal is burned as a fuel, it emits a large amount of pollution, which must be removed before it is released into the environment. This is accomplished through a series of steps, the most important of which is the use of an electrostatic precipitator (ESP), which removes ash particles from the exhaust. A stack now ejects much cleaner exhaust into the atmosphere.

A massive boiler serves as a furnace, transferring heat from the burning fuel to rows and rows of water tubes that completely encircle the flames.

A pump keeps water flowing through the tubes. P1

It contains water and steam at high pressure and produces a stream for the turbine.

Thermal energy is converted into mechanical energy by allowing steam to expand as it passes through turbine blades.

To increase thermal efficiency and prevent premature condensation, the steam is then passed through a reheater S3.

It is similar to an HP turbine, except that it is larger, allowing the steam to expand even more. contains high-pressure water and steam and generates a stream for the turbine

It is made up of two identical sections and is responsible for removing the remaining available energy from the steam. The steam turbine can be either an impulse or a reaction turbine, or a combination of the two.

It causes steam to condense by allowing it to pass through cooling pipes S4.

The heat is carried away by cold water flowing through pipes from outside sources. As cooling water flows through the condenser tubes, its temperature rises by 5oC to 10oC. The temperature of the condensed steam ranges between 27oC and 33oC.

A condensate pump P2 removes the lukewarm condensed steam and directs it to a feedwater pump via a reheater.

To raise the temperature of the feedwater, the heat exchanger receives hot steam bled off from the high-pressure turbine. Thermodynamic studies show that removing some steam in this manner improves overall efficiency.

The amount of gas, oil, or coal injected into the boiler is supplied and controlled by the burners. Before being injected, coal is pulverized. To improve surface contact with the surrounding air, heavy bunker oil is preheated and injected as an atomized jet.

It furnishes the enormous quantities of air needed for combustion.

It transports combustion gases and other by-products to the cleansing apparatus, and from there to the stack and the outside air.

When one percent of a body of water evaporates, the remaining water cools to 5.8 degrees Celsius. The phenomenon of evaporation is used to produce the cooling effect on the condenser.

Evaporation occurs when a large surface of the water is exposed to the surrounding air. The most basic method is to break up the water into small droplets and blow air through the resulting artificial rain.

Warm cooling water flows from the condenser and is piped to the cooling tower’s top, where it is broken up into small droplets. Evaporation occurs as the droplets fall toward the open reservoir below, and the droplets are chilled.