What is Technical Office Protocol (TOP)? TOP is a widely used communication protocol developed by Boeing Computer Services. TOP is the initiative of a group of computer system purchasers. TOP community participants include Boeing, General Motors, Du Pont, McDonnel Douglas, Ford Motors, Procter and Gamble, and Eastman Kodak. TOP discusses the issue of multi-seller consistency in technical desk tasks and messages. Thus TOP is an application-oriented OSI protocol application. Like MAP, TOP is focused on the OSI model of seven layers. Unlike MAP, however, TOP does not have to deal with the requirements of a rough shop floor setting.

TOP also interconnects office tasks with the factory floor via its interface with MAP.

What are the Difference between TOP & MAP?

The below table illustrates the various standards which are defined in MAP V3.0 and TOP V3.0 for each layer of the OSI model: 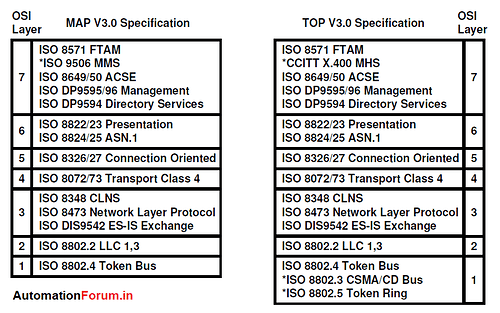 The similarity between the MAP and TOP specifications is self-evident from the table. The major difference between the MAP & TOP is occurring in the first and seventh layers. 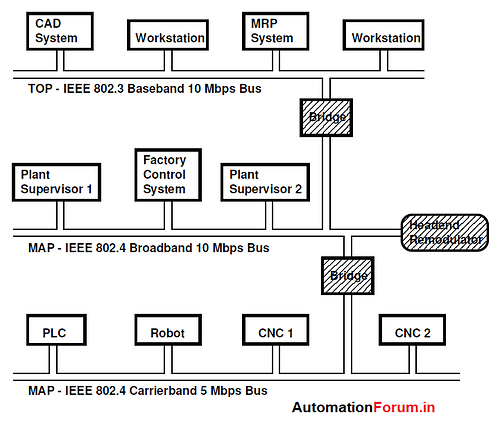 This network is beginning to look like our perfect, compliant plug-in network. Bridges are used to connect the TOP network with the MAP networks for broadband and carrier band.

Various frequency bands are allocated to transmit and collect routes in order to obtain full-duplex connections within a single wire. Signals are transmitted to the headend unit that transforms these frequencies into the receiving group.

The OSI based MAP/TOP scheme does not address all manufacturing communications needs. While a 7 layer OSI network is suitable for CNCs, robots, computers, guided vehicles, etc.,