What is TCP Port?

The Transmission Control Protocol (TCP) is a global communication standard that devices use to send data reliably. TCP is connection-oriented, which means that both the client and the server must be established before data can be sent. This means that the data is trustworthy, ordered, and error-checked while in transit. It is one of the most important protocols in the Internet protocol suite, and the entire set is often referred to as TCP/IP. 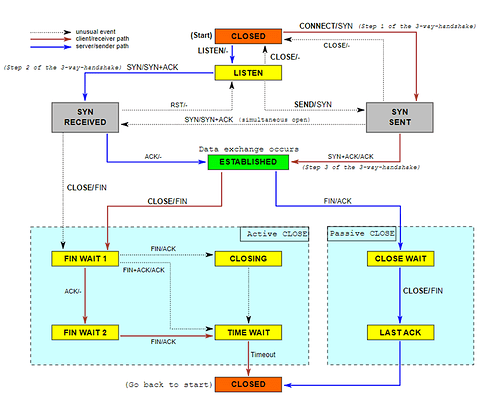 A port number is a unique identifier used in conjunction with an IP address. A port is a 16-bit unsigned integer, and there are 65,535 ports available in the TCP/IP model. The port number range is 0 to 65535. The zero-port number is reserved in TCP and cannot be used, whereas the zero-port is not available in UDP. IANA (Internet Assigned Numbers Authority) is the standard body in charge of allocating port numbers.

How do the TCP port works?

The TCP/IP protocol stack relies heavily on the Transmission Control Protocol. TCP is a connection-oriented protocol that requires a connection or circuit between the sending and receiving computers. TCP is one of the two primary methods of data transmission in a TCP/IP network. The other is UDP, which is a best-effort connectionless protocol.

TCP ports are used by devices to communicate via TCP. A TCP port, in general, represents an application or service-specific endpoint identifier. This accomplishes through the three-way handshake.

Consider opening a web browser. When you type “forumautomation.com” your browser automatically converts it to “https://forumautomation.com/.” And with that, you specify the hypertext transfer protocol — and hopefully, you’ll get the page without any problems. This occurs because forum automation’s web server, also known as its HTTP server, is listening for incoming connections on a specific port address.

Sockets and TCP Connections: How Do They Work?

A socket enables communication with another system that is already running TCP server software. A socket is identified by an IP address and a port number. That is, by using different port numbers, a single host can host multiple instances of the same service.

Why are port numbers required?

A single client can have multiple connections to the same or different servers. Multiple applications may be running on the client at the same time. When the client attempts to access a service, the IP address is insufficient to gain access to the service. The port number is required to access the service from a server. As a result, by assigning a port number to the applications, the transport layer plays an important role in providing multiple communication channels between these applications.

The port numbers are classified into three types:

How many TCP ports are there?

Because a TCP port is a 16-bit unsigned value, there are only so many TCP ports in the world. There are a total of 65,535 TCP ports available.

You’ve probably heard that due to addressing depletion, the world is transitioning from IPv4 to IPv6. It is also entirely possible that we’ll need to expand the port range to accommodate additional services.

However, the first 1,024 TCP ports are referred to as well-known port numbers, and they are agreed upon by technology vendors. So, if you and I were to start a company and sell nice FTP client software, we’d both agree to use the standard, well-known FTP port numbers.

TCP connects the device sending the data to the device that is supposed to receive it. A three-way handshake is a process by which TCP ports establish reliable connections.

The first segment is the SYN segment. To communicate with the receiving computer, the sending device sends an SYN (synchronized sequence number) message. It’s attempting to say, “Hello! Are you available to connect?”

When this occurs, the sending device sends an ACK segment to the receiving device to notify it that its message has been acknowledged. Then a connection is established, and data transfer begins. The connection is terminated once the data transmission has been confirmed and completed.

This ensures that all data sent to the receiving device is complete and in the correct order. Furthermore, no packets are missing because a connection was established first.