What is supervisory control?

Supervisory control is what we actually see in the PLC, SCADA, DCS systems. Which is controlling whole plant or more than one field devices through a master system.

A single controller supervisory control example is shown below. It is a temperature control system.

Here, a computer “supervises” the furnace’s temperature by communicating setpoint values to the temperature indicating controller (TIC) over a digital network interface such as Ethernet. From the temperature controller’s perspective, this is a remote setpoint signal, as opposed to a local setpoint value which would be set by a human operator at the controller faceplate. Since the heat-treatment of metals requires particular temperature ranges and rates of change over time, this control system relieves the human operator of having to manually adjust setpoint values again and again during heat-treatment cycles.Instead, the computer sets different setpoint at different stages according to the needs.

There are many communication protocols used in industries, which can be used for the communication between computer and controller.

The supervisory control system can include many such controllers and can be connected to a single master computer or supervisory computer. 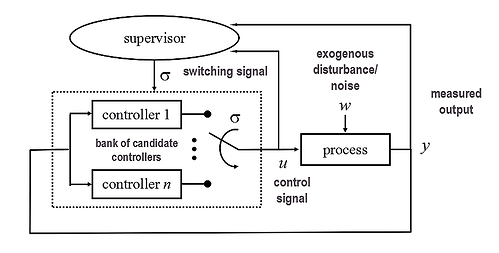 The master computer or supervisor makes the setpoint and gives to the controllers. Controllers adjust the PV with respect to the setpoint using PID controller. This forms a two-layer process control system: the “base” or “regulatory” layer of control (PID loop controllers) and the “high” or “supervisory” level of control (the powerful computer with the mathematical process models).

A single cable can’t do the setpoint changes at once or much frequently, so a series of digital data lines are implemented to transfer setpoint from supervisor to controller. but it may also carry process variable information from those controllers back to the supervisory computer so it has data for its optimization algorithms to operate on:

The complexity of these optimization algorithms is limited only by the computational power of the supervisory computer and the creativity of the programmers and engineers who implement it. A modern trend in process optimization for industries able to produce varying proportions of different products from the same raw material feed is to have computer algorithms select and optimize production not only for maximum cost efficiency, but also for maximum market sales and minimum storage of volatile product