What is Star Delta Starter?

The most common technology for starting a 3-phase induction motor is a star-delta starter. Most induction motors start at once online, however, when the use of large motors, we can’t begin directly due to disruption in voltage line because of excessive starting current congestion.

In the star delta starter, an induction motor is hooked up via a star connection at starting stage. And as soon as the motor acquires the specified speed, the motor is connected via a delta connection.

This is the only starting technology to lowering the inrush starting current of the induction motor. For ordinary operation, the starter may be related with all squirrel-cage induction motors to the delta.

Three-phase motors have 3 windings and every winding has leads that mean there are 6 total leads in a 3-phase motor. This is the way to begin low voltage. In the below pic, we will understand voltage may be decreased even as beginning the star-delta by physically rebuilding the motor. When the motor windings are connected in a star pattern, the voltage throughout every winding may be decreased. It enables to reduce the torque by 3 times.

The curve resets to the delta and resumes ordinary operation after a certain time. They are used to lessen the initial current provided to the motor to reduce energy deliver interruptions.

The star/delta starter includes 3 contactors, a timer, and a thermal overload. In 3-phase motors, the only feature of the contractor is to control the rotating currents. So, contractors are smaller than the single contactor.

During the run, the contacts known as the main contractor and the delta contactor are deployed to each other. The third contact is the star contactor, which, whilst connected to the motor start, carries only the star current. 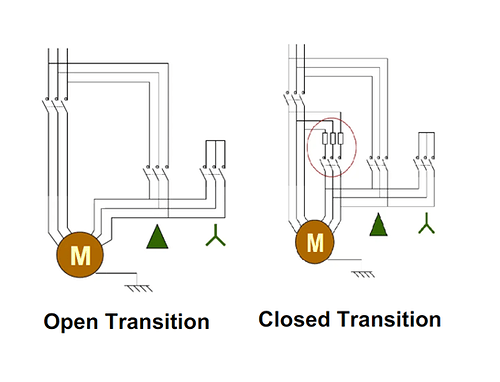 Following are the components of a star-delta starter.

The Star-Delta starter has 3 contacts. They are the Main contactor, Star contactor, and Delta contactor.

Overload protection is supplied with contactors to start the motor. Unlike a circuit breaker, a contactor isn’t always used to interrupt a quick circuit current. For extra current devices, the scale of the contactor varies from small to large.

Winding failure is caused by overloading, operation at unbalanced supply voltage or single phase due to phase loss. Thermal overload relay is used to protect the internal winding fault of the motor, foam short circuit of electric motor.

The function of a timer with the star-delta starter is to exchange contactor from star to delta after accomplishing sufficient boost up to 90% of the motor’s entire speed.

Fuse unit is used to shield the motor from current or short circuit conditions. The number one motive of the fuse is to protect the motor, I include an alloy that has a low melting point.

The running principle is, if the cutting-edge is greater than the specified current limit then the strip may melt and spoil the circuit and isolate the motor from the supply.

A circuit breaker is a robotic electric power switch that protects an electrical circuit from accidents caused by a short circuit or overload or excessive cutting-edge. Once a problem is detected, its primary function is to break the circuit.

On the other hand, a circuit breaker can reset a fuse that must be activated quickly and then replaced to resume normal operation. In the Star Delta starter motor circuit, an MCB is used to protect the motor and the motor winding from short circuits.

Start push button (NO): This is usually a normally open (NO) type push button, used to start the motor.

Stop push button (NC): This is a normally closed (NC) type push button and is used to stop the motor.

The advantages of star delta starters include:

• It produces excessive torque in line with ampere of line current.

• Starting torque is decreased to 1/three of complete load torque.

• A specific set of motors is required.

It is usually applied only to low and medium voltage and light starting torque.