The Internet Architecture Board (IAB) created the Simple Network Management Protocol (SNMP) in RFC1157 as an application-layer protocol for transmitting management information between network devices. It is a protocol in the Transmission Control Internet Protocol (TCPIP) series.

What is Fault Tolerant Ethernet (FTE)?

SNMP is a commonly used network protocol for managing and monitoring network devices. The majority of professional-grade network parts include an SNMP agent. These agents must be activated and configured in order to connect with network monitoring tools or network management systems (NMS).

What is Small form-factor pluggable (SFP)?

SNMP is available in three versions:

The most often used SNMP protocol version currently is SNMP version 2. The most recent version, SNMP version 3, contains new security features such as support for SNMP message authentication and encryption, as well as packet protection while in transit.

What is the use of SNMP?

SNMP is used to gather network-related data or to determine the status of network-connected devices. Collecting this data can assist IT workers in keeping a pulse on all of their managed devices and apps. Every device in the network can be queried in real time for performance information using SNMP, TCP, and other forms of probes. When particular value thresholds are exceeded, the software can notify system administrators, allowing them to delve into the data and troubleshoot a solution.

How does SNMP Work?

Throughout the day, traffic flows across your network as users transfer files, access the web, download files, and so on. SNMP communicates with your network to obtain information about this network device’s behavior. For example, it monitors bytes, packets, and errors sent and received by a network, connection speed between devices, and the number of hits received by a web server. 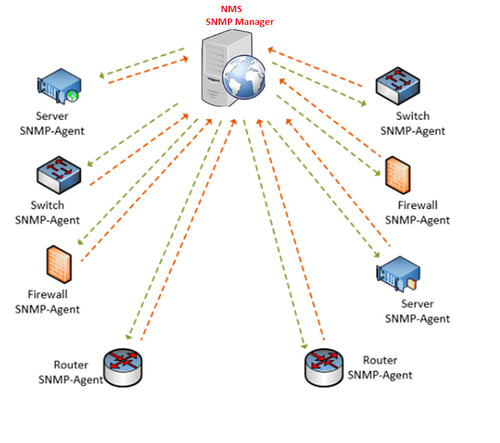 SNMP communicates with devices on your network that “speak” SNMP by sending messages known as protocol data units (PDUs). These are known as SNMP Get-Requests. Network administrators can track almost any data value they specify using these queries. All of the information collected by SNMP can be sent to a product that requests it. Depending on the requirements of the administrator, that product can either display or save the data.

SNMP ports are used by SNMP Managers to communicate with SNMP Agents (i.e. polling) and by agents to submit unsolicited Traps to the SNMP Manager (through UDP 161).

Which ports does SNMP use to operate?

Allowing both the 161 and 162 port numbers on the host firewall is recommended in order for communication to occur.

Why OIDs is used?

The MIB and OID data architecture may appear perplexing, yet a system like this has numerous significant advantages. One advantage is that the manager can obtain information without having to send an explicit request to the agent. This saves overhead while also ensuring that information about the network’s state is always available.

The solution also makes it simple and flexible to coordinate several devices over a network. It works regardless of how large or tiny the network is or what type of devices are connected to it.

SNMP also allows for the rapid collection of vast amounts of data without clogging the network. Because device status information is constantly available in a simple format and is updated in real-time, managers may access it without having to wait for data to be collected or requiring huge data transfers.

Last but not least, some OID values are vendor-specific, making it simple to gather information on a device based solely on its. For instance, if an OID begins with 1.3.6.1.4.1.9, it refers to a Cisco equipment. Other suppliers’ OID standards differ. (Wireshark, an open-source network scanner, includes an OID lookup tool.) The standard OID prefix, which may be used for practically any SNMP-enabled device, is 1.3.6.1.2.

Many capabilities of SNMP tools rely on a mix of push and pull connections between network devices and the network management system. It can execute read or write commands, such as resetting a password or updating a configuration parameter, as part of its basic set of functions. It can also determine how much network bandwidth, CPU, and memory are currently in use. Some SNMP managers can send an email or text message alert to the administrator if a predetermined threshold is exceeded. The protocol’s message commands are described by the PDUs (protocol data units) shown below:

Get Request:- A Get Request is a request to get the value of a variable or a list of variables.

Set Request:- A request sent to the agent by the SNMP manager to issue configurations or commands.

GetNext Request:- A request sent by the SNMP management to the agent to determine the values of the next record in the MIB’s hierarchy.

GetBulk Request:- Sent to the agent by the SNMP management to retrieve big tables of data by issuing several GetNext Request commands.

SNMP Response:- A message sent by the agent to the SNMP management in response to a request.

SNMP Trap:- Asynchronous trap messages sent by SNMP agents notify an SNMP management of a major occurrence, such as an error or failure.

SNMP Inform:- This command confirms the receipt of a trap.

Components and Architecture of SNMP

SNMP relies on an architecture that includes the following components to successfully monitor network activity:

Managed devices: - From printers and workstations to network resources such as routers and switches, many devices in an organization’s network must be managed and monitored. Managed devices can be outfitted with SNMP nodes, allowing them to communicate with other network components.

Agent: - Overall SNMP management is based on a system of collecting and transmitting local device information. This is accomplished through the use of agents, which are programs that are linked to local devices that collect, store, and communicate the presence of data from these contexts.

Network management station: - This is the shared base for agents and SNMP managers, and it provides the memory and computing power to power network administration.

One of the primary disadvantages of SNMP network management is its emphasis on device-specific metrics. While they are critical for determining device conditions, they are separated from other infrastructure data sets like traffic flow records. Furthermore, SNMP monitoring provides little insight into the user or digital experience.