What is seal system in compressor?

The seals and their protection system prevent the escape of process gas along the axis of the compressor. The seal oil system delivers the reserve oil and gas required for the operation of the oil seals of the floating compressor ring. 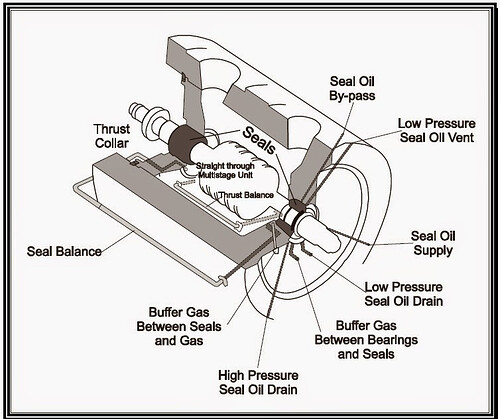 The seal assembly typically consists of two oil seals with carbon ring, spacer and housing. Seal oil is introduced between the two seals at a pressure slightly higher than the suction pressure of the compressor. The leakage of oil is controlled by the free space established between the inner diameter of the seal and the external diameter of the shaft

A small part of the oil drips through the internal seal towards the process gas, creating the seal. This oil is returned to the lubricating oil tank through a high-pressure trap and a degassing system upstream of the oil tank. The balance of the inlet oil flows through the outer seal and returns directly to the oil tank. 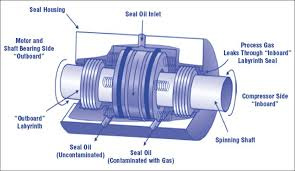 The buffer air system maintains separation of the lubricating oil from the compressor bearing from the dry gas seals.