A router is used to connect two or more packet-switched networks or subnetworks. Its principal functions are to manage traffic between these networks by forwarding data packets to their intended IP addresses and to allow numerous devices to use the same Internet connection. 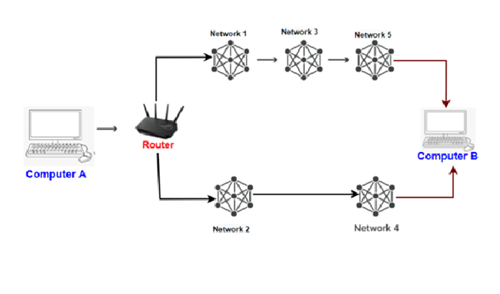 The process of choosing a path between two or more networks is known as network routing. The fundamentals of routing can be applied to any type of network, from telephone networks to public transit. In packet-switching networks like the Internet, routing specifies the paths that Internet Protocol (IP) packets travel from their origin to their destination. These Internet routing decisions are made by routers, which are specialised pieces of network gear.

What is Network Address Translation (NAT) in networking?

How does a Router Works?

Routers connect a modem, such as a fiber, cable, or DSL modem, to other devices, allowing them to communicate with the internet. Most routers, particularly wireless routers, provide several network ports for connecting multiple devices to the internet at the same time.

Wireless routers, as well as wired routers with numerous connections, function as simple network switches that allow devices to communicate with one another. For example, many PCs connected to a router can be set up to share files and printers.

Routers are small computers that have a CPU and memory to handle incoming and outgoing data. Like an operating system on a computer, different software, such as DD-WRT, can be loaded on the router.

A router runs on the OSI model’s Network layer (layer 3) and uses routing tables to determine where traffic is originating from and where it should go.

What are the different types of routers?

A router must first talk with a modem in order to connect a LAN to the Internet. There are two main techniques to set up this.

Wireless Router: A wireless router link to a modem by using an Ethernet connection. It distributes data by transforming binary code packets into radio waves, which are then wirelessly broadcasted using antennae. Wireless routers do not construct LANs; instead, they create WLANs (wireless local area networks), which use wireless communication to connect many devices.

Wired Router: A wired router, like a wireless router, connects to a modem via an Ethernet connection. It then connects to one or more network devices through separate connections, forming a LAN and connecting those devices to the Internet.

There are numerous specialized types of routers that perform specific roles in addition to wireless and wired routers for small LANs:

A core Router, as opposed to a router used in a home or small business LAN, is used by large enterprises and businesses that send a huge volume of data packets via their network. Core routers operate at the network’s “core” and do not connect with other networks.

An edge router connects with both core routers and external networks, whereas a core router primarily regulates data flow within a large-scale network. Edge routers are placed at the"edge" of the network and they use Border Gateway Protocol (BGP) to transfer and receive data from other LANs and WANs.

A virtual router is a software application that serves the same function as a traditional hardware router. It may employ the Virtual Router Redundancy Protocol (VRRP) to create primary and backup virtual routers in the event that one fails.

Advantages and Disadvantages of Router