What is RLC circuit and its applications

What is an RLC circuit

The circuit which consists of resistor-capacitor and inductor is an RLC circuit it may be connected in series or in parallel. Thus it forms a harmonic oscillator for current and it will resonate in a similar way as an LC circuit. it could be also called as a second-order circuit as any voltage or current can be described by a second-order differential equation for the analysis of the circuit. RLC circuits are used to tune the frequencies of AM/FM radios it can be used as a bandpass and bandstop filter. Because of the presence of resistor the peak resonant frequency is reduced

Resonance will occur because its energy is stored in two different ways, when the capacitor is charged it stores energy in the form of electric field and in the form of a magnetic field as the current flows through the inductor the transferring of energy from one to the other can be possible in this circuit and it could be oscillatory.

In the series RLC circuit the circuit is constructed by the combination of capacitor, inductor, and resistor and they are connected in series. The three components in this circuit are in series with the voltage source, the RLC series circuit can be used as a bandpass filter.

With the help of the given parameters, we could find the charge Q by using Kirchhoff’s voltage law

In series RLC circuit the larger reactance determines the net reactance of the circuit and the current is maximum at resonance. 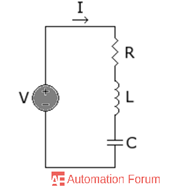 RLC circuit in series has inductance and capacitance XL and XC, has the opposite effect for the circuit phase angle and thus the total reactance is less than the individual reactance

If XL > XC the circuit is inductive

If XC > XL the circuit is capacitive

Then the total reactance is (XL - XC)

Voltage in series combination of L and C

In a series RLC circuit, the capacitor voltage and the inductor voltage are always 180 degrees out of phase with each other and because of that the VC and VL subtract from each other. If the voltage across the L and C are combined it will always be less than the larger individual voltage.

Series resonance is a condition in a series RLC circuit in which the magnitude of capacitive and inductive reactance are always equal and the result is purely resistive impedance.

The parallel RLC is the opposite of the series the applied voltage remains the same in the components and the supplied current gets divided the total current from the supply is not equal to the sum of the flow of the current in individual component but the vector sum is equal as the current flow of the resistor inductor and capacitor are not in the same phase it can’t be added arithmetically. 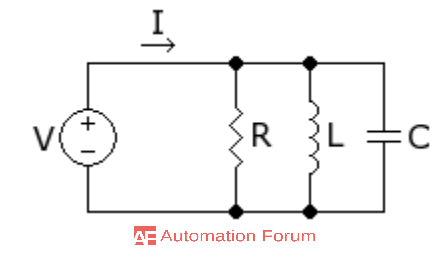 What are the applications of the resonant RLC circuit

What are the difference between series and parallel RLC circuit

What is RC circuit and its applications