What is Raspberry pi and how to use it in projects?

What is Raspberry pi?

A miniature computer that can be hooked up to a monitor, keyboard, and mouse. Like a PC, it has a specialized processor, memory, and graphics driver. It also comes with Raspberry Pi OS, a modified version of Linux, as well as its own operating system.

Despite the Raspberry Pi’s lack of capacity, you can store your operating system on microSD cards (Raspberry Pi, Ubuntu Mate, etc.). The Raspberry Pi can be used to send data over the internet because it supports Bluetooth, ethernet, and Wi-Fi connectivity. The Raspberry Pi project’s software and design are not open-source. 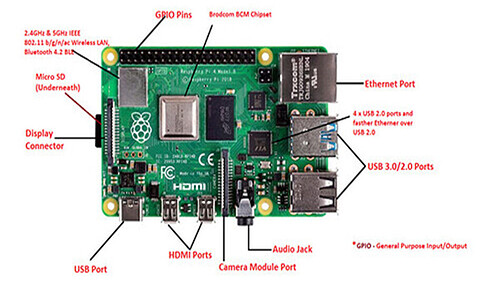 How to Install an Operating System on an SD Card?

Every project requires the Pi to run some type of operating system, usually a variant of Raspbian (Which opens in a new window), the Foundation’s official operating system based on Debian Linux. The Pi Foundation also provides an automated installer dubbed NOOBS (New Out of the Box Software), but we’ll ignore that for the sake of this tutorial.

It’s a good idea to learn how to “flash” an image to the SD card now because many tasks will demand it. Despite the fact that NOOBS is geared for beginners, I find it easier to use.

Because Etcher (Opens in a new window) is available for Windows, macOS, and Linux, I recommend it for writing to the SD card. (Note: if you’ve previously used this SD card in a Pi, it may have certain partitions that aren’t visible in Windows, which you may wipe up with diskpart before proceeding.)

Download the image file for your Pi model—I’m using the entire Raspbian image, which includes all of the recommended software. It’ll either be an IMG file or an IMG wrapped in a ZIP file (which you don’t have to unzip if you’re using Etcher).

Simply open Etcher, choose the file you just downloaded, and click the Select Image button. Select your SD card as the target and press the Flash button. When choosing the target, be cautious because the operation will delete any drive you select.

This may take a while, but once it’s done, eject the SD card, insert it into your Pi, connect the HDMI wire to a display or TV, then plug the Pi into the wall to turn it on. You may configure your Wi-Fi, install applications from the command line with apt(Which opens in a new window), and start tinkering once you’ve landed on the Raspbian desktop.

There is an urgent demand for security, particularly in homes, workplaces, military areas, and border crossings. Security systems that can protect people, property, and national borders have always been in great demand. This initiative intends to provide monitoring in high-risk locations such as border areas and terrorist hotspots without putting human lives in danger. In this project, we utilize an Android Bluetooth app to manage a Raspberry Pi and a 360-degree night vision camera for monitoring.

The camera broadcasts a live stream of the video it records, which can also be seen on an Android app. The camera’s app also has a full 360-degree rotation for complete monitoring, as well as the ability to save both video and audio. The Raspberry Pi-powered Spy robot chassis is connected to a Bluetooth module, which talks with an Android app to provide direction commands to the chassis.