What is Precision Time Protocol (PTP)?

PTP stands for Precision Time Protocol. It is an Ethernet or IP-based protocol that uses a Master/Slave distribution structure to synchronise time clocks on a group of web devices.

PTP is used for software that requires extremely precise timing via Ethernet or Ethernet/IP. For example, in telecommunications applications such as mobile, not only frequency but also process precision is necessary to manage the hand-off of mobile phones from one cell tower to the next. 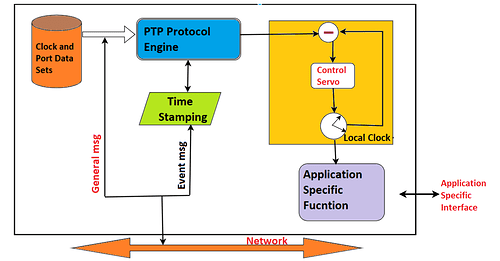 PTP employs a lightweight packet architecture that requires very little bandwidth to operate, and it is important to highlight that it employs many structures for time distribution when compared to NTP. Its intended application is over local area networks, such as Ethernet. IEEE 1588 is a master-member hierarchical system for clock distribution.

PTP is more efficient than NTP but less so than GPS. NTP is comprised of SNTP (Simple NTP), which is stateless (no averaging) and thus accessible for embedded devices, but less efficient. PTP, with a precision of 1 s, fills a clock-synchronization gap between NTP and GPS-based clock synchronisation.

1. Hardware time stamping: - It accurately records the time when event messages transit the physical interface. This reduces the software delay associated with message recognition and processing.

2. Boundary clocks: - These clocks retrieve the time at intermediate points across the network and forward it in a fresh series of messages. These clocks are typically found in network switches and routers, and they serve to lessen the effect of network delay variance, such as that produced by queueing delays.

3. Transparent clocks: - These can also be found in network switches and routers, but instead of recovering and forwarding the time, they merely record the length of time the message spent transiting that switch or router. When the message reaches the slave clock, it carries information about the network’s accumulated delay, allowing the slave clock to align its local time more precisely with the master clock.

PTP has evolved throughout time, and IEEE 1588 is currently undergoing revision to assist increase the protocol’s viability for application in a wide range of industries, including telecommunications, power distribution, automotive, scientific, and industrial networks. Given a large number of participants in that process from various backgrounds, it is apparent that it has a bright future as the primary way of spreading precise time across networks in the next years.

How does PTP works?

PTP is a protocol that allows for seamless communication between multiple devices. It uses a master-slave time resource mechanism to provide synchronisation. This system is made up of one or more communication devices, as well as a single network connection provided by a grandmaster device. This grandmaster is in charge of the primary time reference. The grandmaster sends synchronised data to the devices on the communication medium. This design compensates for delivery variations across the network to provide correct distribution.

What are the applications of PTP?

PTP applications are listed below

Advantages and Disadvantages of PTP

The advantages of PTP’s are