What is PLC Latching?

The latch is used to keep an output active even when the input is turned off. In some industries, such a situation is required.

A motor, for example, can be started by pressing a push button switch. Despite the fact that the switch contacts are not closed, the motor must continue to run until a stop pushbutton switch is pressed.

When the output must be activated even after the entry has ended, latching is used.

A motor that is started by pressing a button switch is a simple example of such a situation. The motor must continue to run until the stop button switch is pressed, despite the fact that the switch connections are not closed. The latching allowed the motor to continue running until the push button was pressed again. 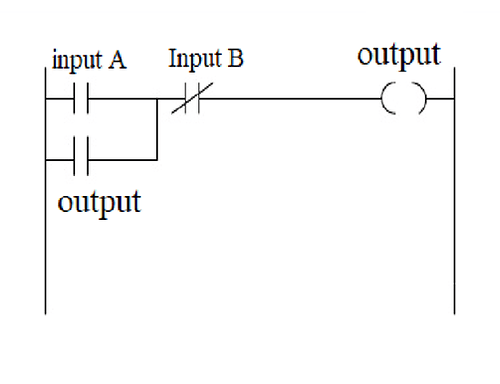 In logic control, circuits that are characteristic of the previous conditions are frequently required. The output is latched in this series by using the output contact itself, so even if the input changes, the output condition remains constant:

When an exit occurs, another set of exit-related contacts is closed. These contacts form an OR logic gate system using the input contacts. Therefore, even if input A is open, the circuit will output the output. Activating the normally closed Contact B is the only way to release the output.

When the start pushbutton is pressed, the contact becomes I0.0 (N-O) N-C. Since the N-O contact I0.1 has already become N-C (due to the normally closed push button on the physical connection), the color corrects and the coil (bulb) Q0.0 becomes energized. 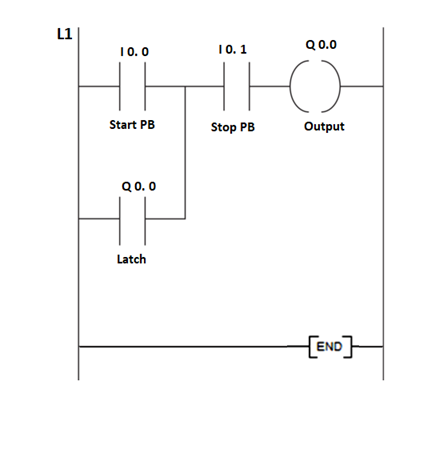 Now, the bulb will also be on when the start push button is released (here comes the idea of ​​latching).

As the Q0.0 coil becomes energized, the latched contact of this coil, represented as Q0.0 (NO), becomes NC, the logic passing through this room and the bulb being on.

Hi…In the beginning of my plc experience I was informed that hooking genuine I/O was an exceptionally terrible thing to do. I know numerous developers that won’t utilize locking (OTL) in any program. They will utilize a line of rationale to “lock” something however wonder whether or not to utilize the guidance. I have utilized a live processor to investigate programs without I/O joined (if the I/O is arranged I go to status and hinder the racks and spaces I’m utilizing. While doing as such I will make a program record for controlling pieces and overwriting the I/O check. It would be something like this: XIC B3/0 OTE I:1/1 If I needed to turn on an info I would flip the B3/0 bit. You can succession an activity by making code to venture through an ideal program work. The above depiction just troubleshoots what you can find in the program however no affects any hardware until you are completely live. Recollect to un-restrain the genuine I/O before investigating your undertaking. On the off chance that the I/O stays restrained you won’t ever see your yields work, or your inuts besides