What is piezoelectricity and how does it work 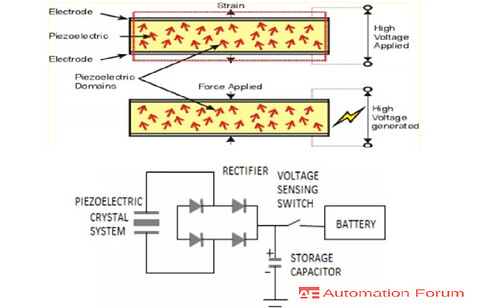 Piezoelectricity was discovered by Pierre curie and paul Jacques in 1880 both of them where French scientists. Generating an electric charge in a material when subjecting it to applied stress, and conversely generating a mechanical strain in response to an applied magnetic field.

what is a piezoelectric transducer

The solid materials which exhibit piezoelectric properties include crystal, in crystals or in other solid materials the atoms are closely arranged and can move slightly. Piezoelectric crystals are electrically neutral, the electrical charge inside these crystals are balanced. So if we apply pressure to this crystal it would change the structure and it would result in changing the position of the atoms, which would affect the balance of positive and negative charge which would create a net electrical charge. This will occur for the whole crystal, thus the positive and negative charges appear on opposite outer faces of the crystal. When a voltage is applied to a piezoelectric crystal the atoms inside it will be subjected to electrical pressure. So in order to rebalance themselves, they have to move and that’s why when a voltage is applied piezoelectric crystal will deform.

What is piezoelectricity used for

Piezoelectricity is used in many places some of them are production and detection of sound, piezoelectric inkjet printing, generation of high voltages, electronic frequency generation, microbalances, to drive an ultrasonic nozzle, and ultrafine focusing of optical assemblies. It can also be used for scanning probe microscopies, such as STM, AFM, MTA, and SNOM. It is also found in everyday uses such as acting as the ignition source for cigarette lighters and it is also used as the time reference source in quartz watches. Piezoelectricity has become an innovation motor. Piezoelectricity is for many technical applications, it is widely used in the field of information and communication, industrial automation, medical diagnostics, automation, and traffic control and in the defense industries.

How to do energy harvesting with piezoelectricity

We can make a small amount of energy by pressuring the piezoelectric crystal once, so if we do this to many piezoelectric crystals more than one time we could create a lot of energy. Piezoelectric roads are an example of this when a vehicle passes over a road the road deflects vertically and these vibrations are released as thermal energy which is being wasted, by using piezoelectric generators in the roads we can convert the vibrations caused by the vehicles into useful electricity. It is constructed by certain layers, the first layer is laid with fine gravel and sand content. After that an asphalt layer is laid to give a strong base for generators, piezoelectric generators are placed in quick-drying concrete all the generators are wired in series to get collective output. Electrical energy is stored and transferred and then it is charged into the battery on one side of the road and from there it is distributed. So we can generate energy by the piezoelectric materials, we can generate electricity from foot traffic, road traffic…

What are the advantages of piezoelectricity

What are the disadvantages of piezoelectricity

What are the applications of piezoelectricity