Logic is developed in every control circuit and automation system based on the open or closed state of switches, sensors, or relays. As a result, understanding the idea of NO/NC is required. The words normally open (NO) and normally closed (NC) are used to describe the states of switches, sensors, or relay contacts when their coils are not energised. It is referred to as the backbone of process automation. 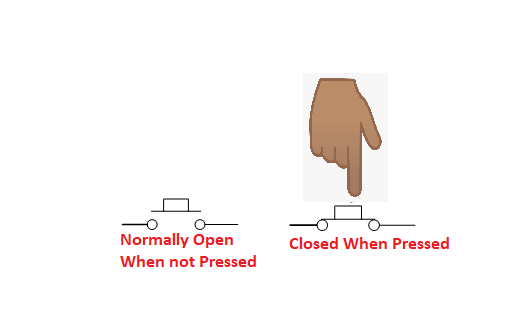 What is meant by open and closed?

What is meant by normally?

This is simply the state of the contact when nothing is affecting it. If it’s a relay, it’s not turned on. If it’s a switch, it’s turned off. If it’s a high limit, like a temperature alert, the present temperature is lower than the limit.

The graphic above depicts the states of a push-NO button’s contact during normal operation and when pressed.

By function, an NC contact, also known as a usually closed contact, is the total opposite of a NO contact. It remains closed until a specific condition is reached. In this situation, let us look at how the limit switch works. When the NC contact of a limit switch is pressed in a circuit, it breaks the circuit or current flow. Similarly, unless the coil of a relay is stimulated, its contacts remain closed.

What is the difference between Normally Closed And Normally Open Inputs?

It’s a good idea to use typically open contacts as PLC inputs. However, it can be harmful for stop function. This is because open contacts can create hazardous situations when they fail.

What if one of the wires cracked?

The diagram below depicts a wire break after a typically open input actuator.

Now, when the system fails, the stop button (the typically open contact) will be useless (wire-break). One failure is the wire break, but that results in another failure:

How could this be considered excellent practice?

That is, when a failure happens (the wire break), the input will behave as if the normally closed contact has been engaged. As a result, if the wire to the stop button breaks, the same thing happens as if the stop button is engaged. The latch will snap.

The Fig below depicts a normally closed input actuator acting as a stop button.

Because the input is always 1, an instruction with a result of 1 will complete the task. The result of the if closed instruction examination is 1.

The diagram below depicts It is best to keep the PLC stop function normally closed.

The stop button now works with both hardware and software. What occurs when the pause button is pressed is shown below: