What is Multivariable control system? 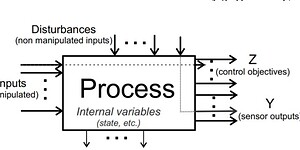 A disturbance in any variable can cause a change in response in any output in its signal path. Depending on the system design,these paths can be direct or indirect.

In most control system,a particular input disturbance cause one output to respond by a larger percentage than the other outputs. The response of the other output is called interaction. Interaction is often a result of system design and cannot be avoided. However the system must either correct or compensate for interaction