What is Manufacturing Automation Protocol (MAP)? How to integrate DCS/PLC with Map?

What is ﻿﻿﻿Manufacturing Automation Protocol (MAP)?

MAP is a hardware/software protocol developed jointly by a group of industries and vendors of computers and PLCs. It follows the ISO OSI model.

MAP uses a broad LAN band with a traffic control token ring protocol. Since it is broadband, the same cable is shared by all devices in the LAN such as computers, CNC machines, robots, and PLCs etc., but different device groups can be placed on separate “channels” on the line.

The physical level of MAP is based on the token bus standard of IEEE 802.4. It uses the logical control standard IEEE 802.2 at the data link level.

How to integrate DCS/PLC with Map?

This figure above shows the integration with DCS system.

The DCS consisted of a multi loop controller, the console of an ACS operator, and a gateway to the MAP. This gateway connects the HLL (high-level link) DCS proprietary LAN to MAP. Either 3-layer Mini-MAP or full 7-layer MAP messages are properly interpreted by the gateway. This capability is known as EPA (enhanced architecture of performance) in a MAP node.

Also connected to a MAP carrierband sub-network was a PLC that communicated using 3-layer messages together with a “bridge” that interfaced with the full 7-layer broadband MAP.

The broadband MAP network spread throughout the exhibition hall and connected many machines designing, manufacturing and controlling products. Through the EPA gateway, these machines had access to process / logical control data.

Data flow of MAP to PLC is illustrated below: 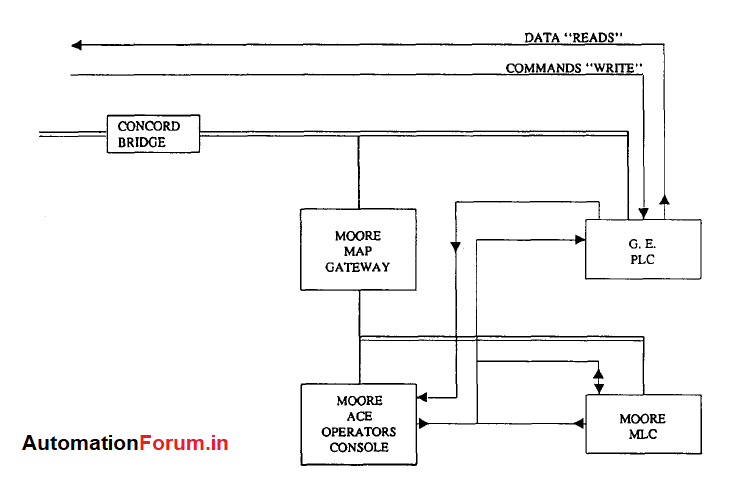 Some console keystrokes will cause a command to be issued to the DCS HLL. This command is transmitted to the EPA gateway in its normal deterministic manner. The gateway to the EPA issues a write command over the Mini-MAP 3-layer. It then issues a Mini-MAP read command and receives the PLC response. This response is processed into a global data contract by the EPA gateway.

The data travels over the DCS HLL back to the operator console. This entire loop required less than 2 seconds.