What is Induction type relay?

They are not usable with DC quantities,owing to the principle of operation

An induction type relay is split-phase induction motor with contacts.

Actuating force is developed in a movable element,that may be a disc or other form of rotor of non-magnetic current-conducting material,by the interaction of electromagnetic fluxes with eddy currents that are induced in the rotor by these fluxes.

In this type of relay,a metal disc is allowed to rotate between two electromagnets.The electromagnets are energized by the interaction of the flux of one of the magnets and the eddy current induced in the disc by other.

The shaded pole structure is generally actuated by current flowing in a single coil on a magnetic structure containing an air gap.

The air gap flux produced by this current is split into two out-of-phase components by a so called “shading ring” generally of copper,that encircles part of the pole face of each pole at the air gap 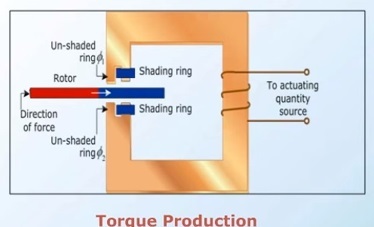 It contain two separate coils on two different magnetic circuits,each of which produces one of the two necessary fluxes for driving the rotor,which is also a disc.

There are two structure in which the most close resemble induction motor,except the rotor iron is stationary,only the rotor-conductor portion being free to rotate.

It is practically suited as directional or phase comparison units.this is because,besides their sensitivity,induction cup relays have study non-vibrating torque and their parasitic torque due to current or voltage alone are small.

They have fast operation and fast reset High operating speed with high operating time in few milliseconds can also be achieved. Modern relays are compact,simple,reliable and robust.

The directional feature is absent Due to the fast operation,the working can be affected by the transients