What is Heat Recovery Steam Generation?

HRSG is in principle as a pressurized steam maker, with heat media coming from gas turbine exhaust gas. Then the steam turbine and then rotate using the exhaust gas as much as possible from the gas turbine. If it does not flow to HRSG, the exhaust gas is discharged into the air through a high temperature with a large flow. Because it operates by utilizing exhaust gas, PLTGU is an efficient generator.

The process of producing steam does not require fuel combustion, it can even utilize heat energy which was previously only discharged into the air through the pressure steam is used to drive the generator. Heating the water in the HRSG is done with bypass stack. Even though the exhaust gas still has a bypass stack.

The function of HRSG is the place where the water warms up to become superheated vapour. The difference in the boiler is the combustion process, while in HRSG there is no combustion. 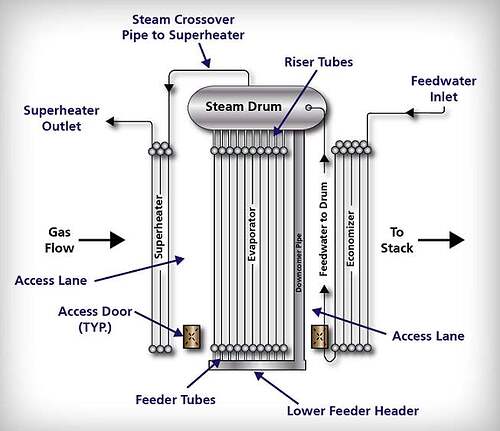 HP Steam Drum: Serves to accommodate the results of high-pressure steam and water clan, then is flowed in the next section.

HP Boiler Circulation Pump: Serves to pump water from the HP Drum through the HP Evaporator.

HP Economizer: Works to increase the temperature of the high-pressure water that enters into it. Consists of HP Primary Economizer clan and HP Secondary Econimizer.

Evaporator HP: Serves to evaporate high-pressure water that enters inside, so that it changes from the water phase to the dry vapour phase.

Primary Super Heater: Serves to increase the temperature of steam coming from HP Evaporator so that it becomes superheated vapour. 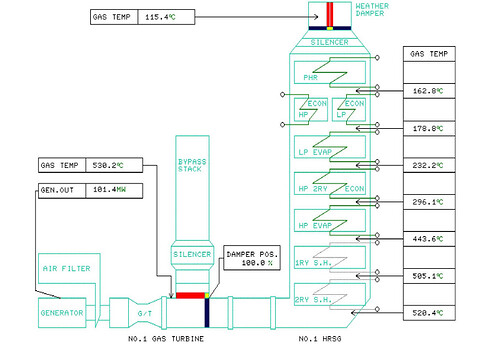 Steam Drum LP: Function to accommodate low-pressure steam and clan steam, then channel it to the next section.

LP Economizer: Serves to raise the temperature of the low-pressure water that enters it before going to the LP Drum.

LP Evaporator: Serves to evaporate low-pressuresure water that enters it, so that from the water phase turns into a dry vapor phase. Then the steam enters the LP Drum to be separated between water and steam. Steam goes to LP Steam Turbine. Other HRSG components are as follows.