What is heat exchanger?

Heat Exchanger (HE) is a heat exchanger equipment between two fluids with different temperatures and heat. One fluid gives heat, while the other receives heat. The need for fluids at a certain temperature is a demand for process design specifications. 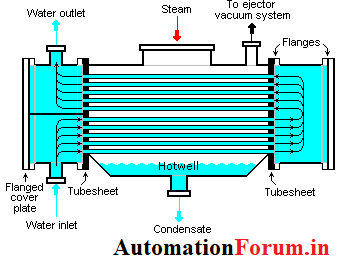 The minimum requirement for heat exchange is the presence of two media streams with different temperatures. One of them as a heat supply, while the other as a heat receiver. When releasing the heat, suppliers will lose heat or become lighter, and vice versa as warm as heat will get additional heat.

Heat transfer media between the two fluids (supplier or receiver of heat) is generally in the form of a tube or pipe. In this context direct heat transfer is not discussed, an example of this type is the cooling tower.

HE works as a heat exchanger between crude oil that goes into the furnace with a residue that goes into the cooler so that the heat contained in the residue can be utilized to raise the temperature of the crude oil and the load of the furnace becomes lighter. The type of HE used is Shell and Tube Heat Exchanger, which consist of 3 pieces arranged in series.

The cooler functions to reduce the temperature or cool the oil products that come out of the fractionation column, stripper column, heat exchanger or condenser with water as a cooling medium to the desired temperature without any phase changes.

Equipment used to reduce the temperature of the vapour to the liquid temperature by leaving the heat to another fluid. One of the streams is a fluid (vapour) to be condensed, usually, steam from the top of the distillation column or fractionation.

Cooling media is from utilities such as cooling water or air (without phase changes). The condenser serves to condense the vapour out of the top of the fractionation column.

Evaporation aims to concentrate on a solution consisting of solutes that are not volatile with volatile solvents. Or it can be said that evaporation is the evaporation process.

A chiller is a machine that transfers heat from a liquid through compression-vapour or cooling absorption cycles. The water vapour compression chiller consists of four main components of the vapour-compression cooling cycle (compressor, evaporator, condenser, and several forms of metering devices.

This machine can carry out various refrigerants. Absorption Chillers use municipal water as the refrigerant and benign silica gel as the desiccant.

Vaporizers are used to vaporize liquids. The steam produced is used for chemical processes, not as a heat source like steam and using electric heating elements. A vaporizer is one component of an anaesthetic machine that functions to vaporize volatile liquid anaesthetics.

This tool is equipped with a dial (dial) which serves to regulate the size of the concentration of the anaesthetic that comes out. Volatile anaesthetics (such as halothane, isoflurane, desflurane or sevoflurane) must be evaporated before being given to the patient.

Double Pipe Exchanger is a heat exchanger equipment that is composed of concentrated tubes or double pipes one smaller than the other (tube). Generally, Double Pipe Exchanger shaped hairpin (two legs connected), but there are also other variants such as multitube hairpin.

Double Pipe Exchanger is an alternative HE which is cheap because it can be assembled with standard pipes. Because of its configuration, this HE can handle high-pressure fluid on the tube sides.

Airfin Cooler is a process fluid cooling device using air flowing using a fan. The consideration of choosing this type of HE is cheap compared to having to use Shell & Tube Exchanger. The comparison must be overall because by building an Airfin Cooler, other complementary facilities are not needed.

While the use of Shell & Tube Exchanger means having to prepare cooling water facilities in large quantities, which means additional cooling towers, chemicals, piping systems with their instrumentation and control, pumps, and so on.